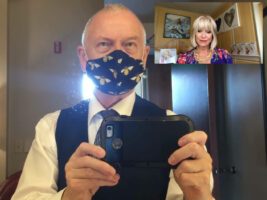 While Robert Fripp is away on tour with King Crimson in the US, he’s been exchanging video postcards with his wife Toyah Willcox online. In his latest video, the guitarist gave a backstage tour of a King Crimson concert before curtains went up.

The footage shot by Fripp was of Nashville’s legendary Ryman Auditorium – the “home of country music” as he described the venue which housed the Grand Ole Opry for three decades, and has seen the likes of Elvis, Johnny Cash and Hank Williams grace its stage.
Viewers also get to see the intricate stage set-up of King Crimson’s current line-up, which comprises bassist Tony Levin, vocalist and multi-instrumentalist Jakko Jakszyk, multi-instrumentalist Mel Collins, and drummers Pat Mastelotto, Gavin Harrison and Jeremy Stacey.
Watch the video below:

On Sunday (22 August), the couple shared unseen “backstage” footage from their Sunday Lunch Series, which they started in 2020 to keep fans spirited during the COVID-19 pandemic.
“We’ve reheated some of Toyah & Robert’s Sunday Lunch,” a caption for the video read. “There’s some classic moments and some unseen bits to feast on this Sunday. Enjoy and we will be back soon.”