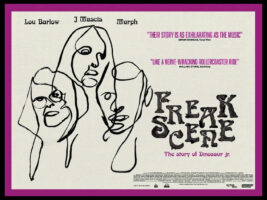 Watch the trailer for a new Dinosaur Jr documentary

A new documentary film Freakscene – The Story Of Dinosaur Jr will chart the journey of frontman J Mascis, bassist Lou Barlow and drummer Murph across the rise of the alt-rock cult legends. The trailer for the film is out now.

The film, directed by Philipp Reichenheim, mixes archival footage of concerts, music videos, and interviews with J Mascis, Lou Barlow and Murph, as well as Kim Gordon, Henry Rollins, Bob Mould, Thurston Moore, and more. The film describes itself as “An emotional, tragically funny and sometimes noisy rollercoaster ride by a dysfunctional family, Dinosaur Jr.” See the trailer below.

Dinosaur Jr’s latest record, Sweep It Into Space, was released earlier this year. In an 8/10 review, Guitar.com called the record: “Another consistently strong set from a band whose second act threatens to eclipse their initial pomp.” We also noted that “Mascis’ playing is elevated further by the presence of another guitarist,” in the form of Kurt Vile, who produced and played on the album.
Freakscene – The Story Of Dinosaur Jr lands in UK cinemas on 1 October.
The post Watch the trailer for a new Dinosaur Jr documentary appeared first on Guitar.com | All Things Guitar.