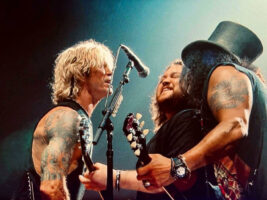 Guns N’ Roses have just wrapped up the US leg of their We’re F’N’ Back tour over the weekend, and to mark its closure brought Mammoth WVH’s Wolfgang Van Halen on stage for a rendition of their classic Paradise City.

Wolfgang’s band Mammoth WVH were supporting Guns N’ Roses across the tour. The last show, which took place on 2 October at Hollywood’s Hard Rock Live Arena, saw the band perform a four-song encore of Coma, Don’t Cry, a cover of The Seeker by The Who, with the final track being Paradise City.
“Let’s bring out our friend Wolfy. Wolfgang Van Halen, do you know how cool it is to say that? We’re talking legacy,” frontman Axl Rose said, before Van Halen joined them onstage. The performance featured Wolfgang joining bassist Duff McCagan and guitarist Slash for some shared-mic backing vocals.
Take a look at the group performance below.

Guns N’ Roses recently announced a four-track EP, entitled Hard Skool, to be released next February. It will be the band’s first release from the band in 28 years to feature members Axl Rose, Slash and Duff McKagan together. Slash and McKagan rejoined the band in 2016, after leaving following the 1993 studio album, The Spaghetti Incident?.
The Hard Skool EP will arrive on 25 February 2022, featuring the title track, their single Absurd, released in August, and live renditions of ’90s tracks Don’t Cry and You’re Crazy from their debut album. The record will also be available on seven-inch vinyl starting June 24 2022.
The post Watch Wolfgang Van Halen join Guns N’ Roses on stage for a rendition of Paradise City appeared first on Guitar.com | All Things Guitar.