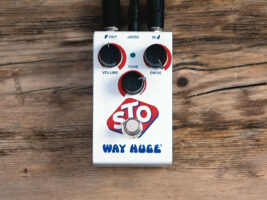 Way Huge has introduced the STO (Super Terrific Overdrive), a new pedal that reinterprets the circuit of the famed Nobels ODR-1.

The ODR-1 and its variations became a staple of the Nashville scene due to their uniquely punchy frequency response. There’s a mild bump to the midrange, helping both single-coils and humbuckers stand out in a mix. The Way Huge STO’s update to its circuit adds an FET op-amp to the input stage, rather than a JFET, for an “even smoother, more pillowy sound.”
The controls on the STO are a simple trio of volume, tone and drive. Way Huge notes that the drive knob “deserves special recognition – its range is wide and responsive and makes it sound like your amp is breaking up of its own natural accord but without any more volume than you need.”
You can hear the pedal in action with Way Huge’s demo video below, with the full range of the drive knob on display.

Way Huge’s last pedal, the Penny Saver Royal, was launched in March. It’s a collaboration with blues guitarist Joe Bonamassa, and brought together two stompboxes from the Way Huge catalogue: the WM28 Overrated Special Overdrive and the Blue Hippo Chorus pedal.
The STO lists for $149.99. Find out more at jimdunlop.com.
The post Way Huge launches its own ODR-1-inspired Super Terrific Overdrive, STO for short appeared first on Guitar.com | All Things Guitar.