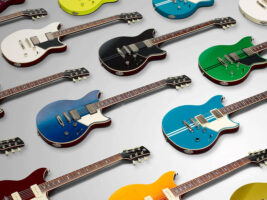 Yamaha has announced an update to its Revstar series of motorcycle design-inspired electric guitars, which first launched back in 2015.

The 2022 series of Revstar electric guitars comes in three tiers: Element, Standard and the topshelf Professional.
The redesigned guitars feature chambered bodies and an in-house acoustic design process which Yamaha claims “uses advanced measurement, analysis, and modeling tools to design guitar bodies that offer clear, powerful tone and maximum resonance.”
The Standard and Professional share many similarities, both being crafted by luthiers in Japan. Both come with a choice of custom-wound Alnico V pickups, either humbuckers or P90-style single-coils.
A small, but neat detail, is the brand’s use of a Hanko stamp – a seal used in lieu of signatures in some parts of Asia – to indicate that the guitar was made in Japan. On the Revstars, this appears behind the headstock, as seen below.
Image: Yamaha
Either model offers some additional tone shaping options with a specialised controls. On the Professional and Standard, this comes with the Focus Switch boost, which is said crank signals to something evocative of an overwound pickup.
Meanwhile, the Element features a dry switch, which engages a high-pass filter for chimey tones that cut through the mix. Yamaha says this has the benefit of enabling brighter tones “without the added noise or power drop of conventional coil splits.”
“The new Revstar series fine-tunes that concept with enhanced playability, versatility, and tone, for players interested in classic style with modern upgrades,” said Dave Miner, Product Marketing Manager for Electric Guitars at Yamaha.
Hear them in action below:

The Revstar Professional and Standard will be available at $3,999 and $1,599, respectively. Meanwhile, the Element is priced at $999 each.
Learn more at yamaha.com
The post Yamaha’s motorcycle-inspired Revstar electric guitars get a modern tune-up for 2022 appeared first on Guitar.com | All Things Guitar.