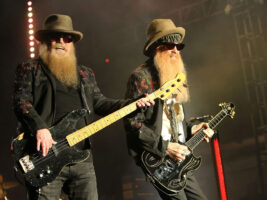 The long-time bassist and vocalist for blues-rock band ZZ Top, Dusty Hill, has died. He was 72.
The news was shared by ZZ Top on their social media. Frank Beard and Billy Gibbons wrote in a joint statement: “We are saddened by the news today that our Compadre, Dusty Hill, has passed away in his sleep at home in Houston, TX.
“We, along with legions of ZZ Top fans around the world, will miss your steadfast presence, your good nature and enduring commitment to providing that monumental bottom to the ‘Top. We will forever be connected to that ‘Blues Shuffle in C.’”
“You will be missed greatly, amigo.”
ZZ Top was formed in 1969, initially with Billy Gibbons on guitar, Lanier Greig on bass guitar and organ, and Dan Mitchell on drums. Hill joined ZZ Top in 1970, a year after their first single was released. He’s appeared on all fifteen of the band’s studio albums.

Hill’s role in ZZ Top was far from just the bass. He often contributed organ and keyboards, as well as taking on backing and lead vocals. He’s also often credited with songwriting across the band’ records.
Hill had recently suffered a hip injury, one that caused him to miss some of the band’s last summer tour. ZZ Top began this tour less than two weeks ago in Iowa. Elwood Francis, ZZ Top’s longtime guitar tech, filled in for Hill. The tour is still set to continue at present.
The post ZZ Top bassist Dusty Hill has died at the age of 72 appeared first on Guitar.com | All Things Guitar.