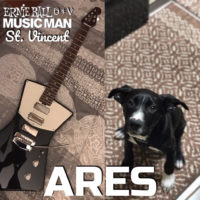 Off Topic: Aloha Guys it's been awhile, any NGs?

Aloha from Hawaii my fellow EBMM/SBMM fanatics! 😎 So what’s up? What’s new? And most importantly, what kinda new guitars y’all slinging around nowadays? I’ve been in a medium action level this year. As far as EBMM/SBMM guitars go.. The first pickup was a Sterling Valentine Which is an amazing guitar. We had a little wiring issue that got cleared up when I returned to LA and took her into the SBMM warehouse where Brian and the guys took real good care of her and sent her back to me. But when they sent it back they also were sending a second guitar, I decided to get a JP150 in that beautiful see Neptune Blue quilted top they released this year at Winter Namm. But I also got lucky as I figured out by myself then verified with Brian, I got the prototype/picture model that has been use for media releases such as AMS, Zzounds & all those online mega stores. I was so stoked, Mahalo Brian! In between that I also got that Armada I wanted, and let me just say truthfully.. I haven’t used a LP guitar to track eversince, and I’ve been doing a lot of studio work! I was setup with a Balboa Blue Burst, a month or so ago EB had used a pic of myself and the Armada on daily promotion on their social media accounts, what an honor! Then about 3 weeks ago I received my St.Vincent Black/White guitar.. And I’m still blown away with its versatility! Those 3 mini-humbuckers are such warm pieces and the switching options takes some getting used to but it’s perfect for someone like me who can go from a swinging jazz number to some Dirty Texas Blues slinging in a matter of a song. So that’s where I’m at.. 🙂 I was gifted a few other guitars from other companies which brings the grand total to about 91 but hey I’m a guitarist, it’s what I do! Anyways, lmk what y’all have gotten or working on getting.. Here’s a pic of our newest family member Ares and the new STV guitar. They’re like twins.. So naturally I named my guitar after our gorgeous little puppy! ARES… 🤙🏽🤘🏽🎶🎸

Sent from my iPhone using Tapatalk

Question: Is this an original fingerboard on this '87 Stingray?

L3 and Fractal Audio in action

Not a GC fan…but somebody BUY THIS!