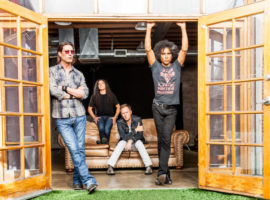 Alice in Chains have announced dates for the second leg of their North American headline tour, which kicks off August 22 at the Queen Elizabeth Theatre in Vancouver, British Columbia. These new dates are part of an extended worldwide trek that’ll see the band performing across North America and Europe. The current dates—which stretch from April to September—are listed below, and ticket information can be found here.

In other Alice In Chains news, the band—Jerry Cantrell, Sean Kinney, Mike Inez and William DuVall—are putting the finishing touches on the their new album, the followup to 2013’s The Devil Put Dinosaurs Here. The disc, which was recorded at Henson Studios in Los Angeles with producer Nick Raskulinecz, will be released later this year. Stay tuned for more info in the weeks ahead.

For more information, point your browser to aliceinchains.com.