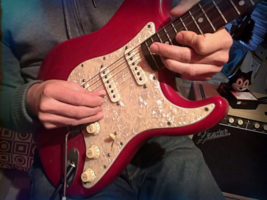 Expanding on Chord Shapes Within the Context of Funk Guitar

In last month’s column, I discussed some techniques one can apply when soloing, specifically using both a single-note and a chordal approach in combination to create a kind of “harmonic” improvisation that helps us discover new chords and sounds.

My deeper investigation into “chordal improvisation” began in my early days as a guitarist. I played rhythm guitar in a lot of funk bands, and there were times when the song would sit on Dm7 for minutes on end. After I’d played some really straight, basic stuff like the patterns shown in FIGURES 1 and 2—which are essentially based around static Dm13 voicings—I began to ask myself, What can I do now? I realized that I was running out of stuff to play pretty much right away. I didn’t know many different chord shapes, and within a creative context of live performance, I needed something more I could draw from.

This combination of scale use and harmony playing that I outlined in my previous column became my way out of the trap of either being locked into one or two specific rhythm patterns or trying to learn a bunch of chord forms that I would probably soon forget. Instead, I’d improvise chordally and rhythmically, which would by nature offer me an endless array of things to play over a funk groove.

Let’s use as our basis a slightly uptempo groove in the key of C minor. FIGURE 3 illustrates 17 bars of purely improvised “rhythm” guitar over a funk groove that stays within the confines of the C minor harmonic environment. I begin with a quick stab on Cm7sus4 and follow in the next two bars with single-note riffs based on C minor pentatonic (C Ef F G Bf).

In bar 4, I begin to use two- and three-note voicings in a purely spontaneous, improvised way. The only stipulation I’ve applied here is that the harmonic focus of everything I play is C Dorian (C D Ef F G A Bf), which is like C minor pentatonic but adds the major second, D, and the sixth, A. With that in mind, I can give my rhythmic imagination free reign and orchestrate the rhythms I am looking to create in a harmonically appropriate way, accessing those notes, and that sound, only.

This really becomes fun when you explore areas of the fretboard with which you may not be very familiar. In this example, if you have learned C Dorian well on the fretboard, it will not be difficult to improvise chordally using this approach. The most important aspect is to be as rhythmically and harmonically spontaneous as you can. This way, new sounds will present themselves to you constantly as you move through different combinations of notes, chord shapes and rhythmic ideas.

The best acoustic guitar strings 2020: plus everything you need to know about acoustic strings