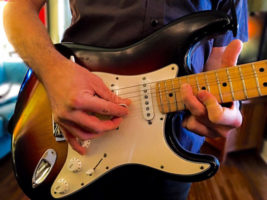 I’m always looking for new and challenging ways to make my practicing and playing more fun and creative — and in the process, dig down deep to discover something new about the guitar and myself.

In this lesson, I will discuss and demonstrate my first finger twister, a combination of a major and minor scale and arpeggios across the fretboard.

In the first example, we have an ascending major scale. Remember these scales are moveable; but for this particular example, we will use G major. Nothing special and ordinary, right? But once we get to the top note on the high E string, we descend as a major arpeggio.

It’s a very challenging exercise for your mind and fingers for a few reasons. Firstly, we will be using strict alternate picking of every note going up the scale, then skipping notes on the way down the arpeggio playing only the first, third, fifth and seventh notes respectively.

Secondly, there will be a rhythm change on the way down, too, in which we will be pulling off the first two notes of the descending arpeggio. You will have to be able to switch mental and physical gears quickly. As with all the exercises I write about and play, I suggest playing with a metronome starting at about 100 bpm and gradually accelerating the tempo as you get more comfortable.

In the second example, we will do the same with a G natural minor scale ascending across the neck with strict alternate picking also. Remember these scales are moveable! But then we will descend with a minor arpeggio.

To make this even more rhythmically challenging, we will pull off the first two notes of the minor arpeggio on the way down. A quick warning: Switching from the ascending picking part to the descending pull off part will require you to barre the first two strings to make it sound clean and concise. This may put some strain on your fret-hand forearm, especially when playing at a quick tempo with a metronome. If you experience discomfort and pain, stop immediately and play the exercise at a slower tempo.

Now get out there and pick up that guitar and play, just like yesterday! As always I thank you for reading my column at GuitarWorld.com. Feedback and comments are always welcome.

Guitarist Richard Rossicone is a veteran of the New York City and Long Island original and cover band scene. He’s been playing since he was 8, when he attended his first concert (Kiss) and saw Pete Townshend smash a guitar. He has studied with various instructors over the years, which led him to a career in music therapy. He began his educational journey at Queensboro Community College, where the faculty introducing him to classical music. He received his associate’s degree in fine arts in 1997 and went on to receive his bachelor’s in music therapy in 2001 and his master’s in music therapy from New York University in 2004. He’s been Board Certified as a music therapist since 2002. Richard continued his studies at C.W. Post University, pursuing a second master’s degree in classical guitar performance and music history, studying under Harris Becker. He’s been teaching guitar, piano and theory since 2002 and in 2006 started his own company, Rossicone Music Studios. Visit him at Axgrinder.com and his Complete Guitarist Facebook page.Check out Richard’s new book, ‘The Complete Guitarist Handbook: Vol. 1,’ which is available at Amazon.com.