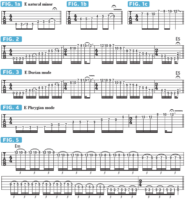 How to Incorporate Minor Scales Into Riffs and Rhythm Parts

The minor scale is the most commonly used scale in metal. This month, I’d like to detail the most prevalent minor scales in metal: natural minor (also known as the Aeolian mode), the Dorian mode, the Phrygian mode and the harmonic minor scale.

The same type of symmetry occurs in the second octave, as shown in FIGURE 1b, as well as in the third octave (see FIGURE 1c). FIGURE 2 shows E natural minor played across three octaves. Another essential minor scale is the Dorian mode.

As shown in FIGURE 5, I can play fast triplet figures articulated with pull-offs on every string and create a seamless sound while moving down through three octaves. Also essential to metal guitar is the harmonic minor scale, shown in the key of E in FIGURES 6a and 6b. Harmonic minor is also very similar to natural minor, with the exception of the seventh scale degree.

In harmonic minor, there is a major, or “natural,” seventh, which in the key of E would be D#. Harmonic minor is a great scale for heavy single-note licks, as demonstrated in FIGURE 7. A great twist is to play double-stops, or two-note figures, against the open low E pedal, as I do in FIGURE 8, something heard often in the music of In Flames and At the Gates. 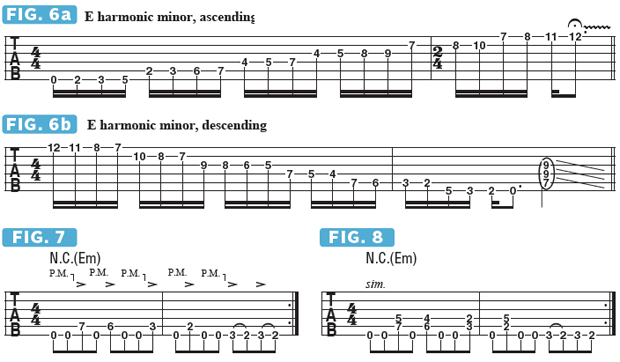