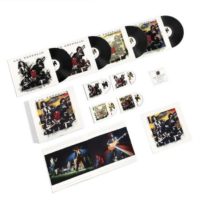 Led Zeppelin Announce 'How the West Was Won' Reissue

Last month, Jimmy Page stated in an interview that new “product” would be arriving from Led Zeppelin in celebration of the band’s 50th anniversary. Though we’re just a few weeks into 2018, it certainly seems that Page is making good on his promise.

First, it was announced that an illustrated book would arrive this year in celebration of their semicentennial. Now, the band has announced that their 2003 live album, How the West Was Won, has been remastered under the supervision of Jimmy Page, and will be reissued as a super deluxe box set. This box set features three CDs, four LPs, a DVD with 5.1 Surround audio, a digital download card, a book filled with rare and previously unpublished photos of the band and a high-quality print of the original album cover.

The album was recorded during the band’s performances at the Forum in Los Angeles and the Long Beach Arena on June 25 and 27, 1972. The performances were edited together to give How the West Was Won the feel of a single, continuous live performance.

The How the West Was Won box set will be released on March 23 via Atlantic/Swan Song. You can preorder it here.