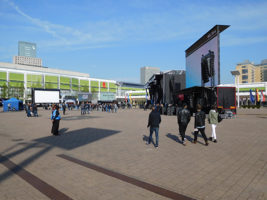 MIN’s publisher reflects on this year’s show as doubts grow about its future as Europe’s premier MI trade event.

After padding the halls of both Prolight & Sound and Musikmesse it isn’t hard to see which is clearly the dominant half of this annual extravaganza. Prolight & Sound has taken over. As for the Musikmesse? One leaves the public (or is it trade, or is it a retail show?) with mixed emotions.

Having attended Europe’s best MI event for more years than I can recall, I had no idea what to expect this year. But passing through the ornate entrance into the show, through the ticket scanners and down the corridor to the centre square, bordered by halls 3,4 and 5, where Musikmesse used to be, it all felt very unfamiliar. The Gibson Bus and the Peavey tent were no longer there, and in their spaces stood an artic truck, tethered to a mobile stage – PL&S, where Musikmesse used to be. So the two shows have now swapped places and what was once an MI tented village is now just a truck with a stage attached. From all accounts, the sound was good and everything worked well but there was no escaping the fact that it looked like a dingy adrift in the middle of the Atlantic.

With some apprehension, we moved into halls 3,4 and 5. They were were well stocked with all the latest pro audio, lighting and staging products and very impressive they were too. But personally, I couldn’t help feeling it was like when you visit a former home and find the decorations and furnishings have been changed. That said, PL&S looked fresh and well subscribed. Clearly, the organisers have decided that the growth and sustainability of PL&S makes it the horse to back.

So what of Musikmesse? You take a bus journey to the back of this enormous site and, frankly, I found it rather disappointing. Many major brands were either not present at all, or if they were, they were being represented on a tiny scale by retail partner Music Store, Cologne.

Interestingly, Music Store was displaying retail prices on the booth. So, you assume, deals could be had by the ticket buying members of the public who had paid their 40Euros? Oh, no they couldn’t! Despite the way in which Musikmesse has morphed into a public show, exhibitors are prohibited from selling to the public. It’s true that this is a debate that has taken place at music shows in the UK over the years but really, in 2017, is this sensible?

As if highlighting the shrinking importance of MI, the drum and guitar components now share a hall, but the combination was disappointing. Yes, a few familiar brands were there, but there were far too many that weren’t and the resulting vast gaps between the booths were unprecedented. Just check the list and count the major brands like Marshall, DW, Gretsch and Pearl, to mention a few – all absent.

The organisers had devised other incentives to create good content in the drum and guitar hall, with the much vaunted ‘drum and guitar camps’, about which much had been made in the pre-show Press releases. But despite having the footprint of a small town to play with, what they actually offered visitors were sound proof booths not much bigger than cargo containers, which the public had to squash into. I can’t imagine those visitors felt they had had their 40 Euros worth when they were confronted with these. At one point, we looked through the drum camp booth window, which was rammed to breaking point, to witness drum legend Chris Coleman demonstrating his chops, but profusely sweating due to being placed in this human pressure cooker. It can’t have been a lot more comfortable for the visitors either and really wasn’t good enough.

So what did the distributors and manufacturers make of it all? Those I spoke with had mixed emotions. The business meeting rooms are popular and it’s clear that most exhibitors see a value in them, but their public exhibition booths downstairs were either absent, or just a gesture. Overall, from those I spoke with, people still see value in the show as an opportunity to meet dealers from Europe and further afield and overall, however diminished it may seem as a show, business had still been done.

But there’s no avoiding the fact that Musikmesse is now unrecognisable as the trade show it once was. It is now clearly a consumer show, and one where exhibitors aren’t even allowed to sell their products, which must be frustrating for both parties.

MIN conducted an email survey before the show (you probably received an email from us asking for your opinions) and what was clear from the responses was that there is a real divide in UK trade opinion. Some think it is still a worthwhile pilgrimage, but many now feel it is of little relevance to them. Twenty years ago there would have been no such equivocation – Frankfurt was unquestionably the place to be.

Musikmesse is a well-funded organisation, with a great venue and the space available to create fantastic content (like that of guitar and drum camps if they had been bigger) but it is represented on such a small scale now that you wonder if it would be wiser to place all the MI brands into a single smaller hall, with areas dedicated for better targeted content.

‘Get everyone in one building’, was the comment from one UK company I spoke with. ‘Make it easier to get around and navigate and maybe grow the show in its new format’. That would motivate me to come as a punter – that and the ability to buy.

Dream Theater's John Myung: "There are moments when I’m playing parts live that I wish I did on the album the first time round"

Get to grips with legato playing using this simple guitar workout

How to make your guitar stay in tune