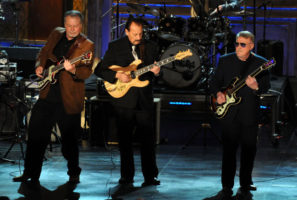 Nokie Edwards, the guitarist heard on the 1960 instrumental surf-rock hit “Walk, Don’t Run” and several other classic songs by the Ventures, died yesterday, March 12, at age 82. Edwards reportedly submitted to an infection he’d been fighting since undergoing hip surgery in December.

Although his name and face were never as widely known as Eric Clapton, Dick Dale, Buddy Guy or George Harrison, Edwards’ playing had an undeniable impact on rock and roll in the Sixties. His playing on “Walk, Don’t Run,” which was recorded by Johnny Smith in 1954, then by Chet Atkins in 1956 and the Ventures in 1960, is anything but flamboyant. It’s the picture of simplicity, and melody is king.

“I believe in simplicity,” Edwards said in 2001. “If you have a melodic line, people will like it. If you can hum it, you can have a hit.”

The band’s other hits include “Hawaii Five-O,” “Nadia’s Theme” and “SWAT”—and they also recorded their own versions of other classic instrumental-rock mainstays, including “Wipe Out,” “Sleepwalk,” “Pipeline,” “Apache,” “Telstar” and “The Lonely Bull.” If you were a guitarist who grew up in the Sixties, you probably tried to sound like Edwards at some point.

Although surf rock had its moment in the early Sixties (prior to the arrival of the Beatles in the U.S.), the Ventures were able to hang on and adapt to most of rock’s frequent mood swings, releasing more than three dozen albums in the Sixties and Seventies. Although Edwards left the band in 1968, he returned in 1973 and stuck around till 1984. Regardless, he often appeared (and toured) with the Ventures for the next three decades; he even toured Japan with the band in 2012.

Edwards’ other work includes playing guitar for Lefty Frizzell, AdVenture, Art Greenhaw and the Light Crust Doughboys. The critically acclaimed collaboration between Edwards and Greenhaw resulted in a number of albums in several genres, including Edwards’ two nominations for “Grammy Award for Best Southern, Country or Bluegrass Gospel Album of the Year” (20th Century Gospel from 2005 and Southern Meets Soul in 2006).

After accepting an offer to pursue acting, Edwards landed a role on Deadwood, a Western drama TV series. He played the mysterious friend of Wild Bill Hickok and a local citizen, who serves as a bridge between the villains and heroes of the show.

In 2008, Edwards was inducted into the Rock and Roll Hall of Fame with the Ventures. In July 2010, guitarist Deke Dickerson announced on his Facebook page that he was working on a new studio album with Edwards. Dickerson and his band backed Edwards for several shows, including Dickerson’s Guitar Geek Festival in Anaheim, California.

Nole Floyd Edwards—better known as “Nokie”—was born May 9, 1935, in Lahoma, Oklahoma, and died in Yuma, Arizona. Our thoughts go out to his family and friends.