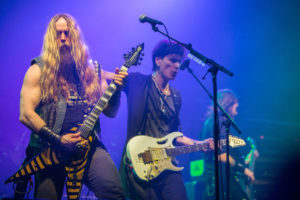 Back in 1994, Ozzy Osbourne and Steve Vai cowrote a handful of songs. According to some sources, Vai was even slated to perform on Ozzy’s next album, the disc that would become 1995’s Ozzmosis.

For whatever reason, however, that didn’t happen. In fact, only one song from those writing sessions has ever seen the light of day, a five-minute-long ditty called “My Little Man,” which wound up on Ozzmosis. And, best of all, it features lyrics by Motörhead frontman Lemmy Kilmister.

“I wrote a song with [Lemmy] and Ozzy called ‘My Little Man’ that appears on Ozzy’s Ozzmosis record,” Vai said in December 2015, upon hearing the news of Lemmy’s death at age 70. “Lemmy wrote the lyrics. If you listen to [them], you can glean an insight into the deep softness that was comfortably resting under the external persona. The song is deeply touching, and when I met his son Paul, I realized how sincere those lyrics are.”

When some delusional fans hear Ozzy’s version of “My Little Man,” they insist that Vai is playing either electric sitar or lead guitar—or both. And that would be true—except for the fact that it isn’t. Zakk Wylde, Ozzy’s guitarist at the time (and at the time of this writing), is playing both instruments with—it should be mentioned—a great deal of panache and taste.

By the way, to catch up with Ozzy and Zakk in 2018, be sure to check out Guitar World’s May 2018 cover story—”Ozzy Osbourne and Zakk Wylde Reflect on Three Decades Together As One of Metal’s Most Beloved Partnerships.”

Anyway, you can hear “My Little Man,” which is officially credited to Osbourne/Killmister/Vai, below. Enjoy!