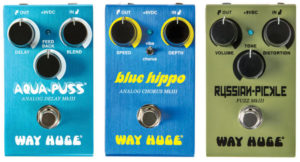 If I didn’t know any better and someone I trusted told me, “Dude, I’m giving you an Aqua-Puss, a Blue Hippo and a Russian Pickle,” I’d be pretty sure I’d be receiving a handful of hallucinogens. And that would be okay. But seriously, no—no, it wouldn’t be okay! All joking aside, I do know those trippy names come with some serious pedigree as beloved and sought-after effect pedals from Way Huge. Only this time around, they’re not so way huge, because the Way Huge Smalls Aqua-Puss Analog Delay, Smalls Blue Hippo Analog Chorus and Smalls Russian Pickle Fuzz are now miniaturized Doppelgangers of the originals. Best of all, these Way Huge Smalls stompboxes preserve the same features and sweet tones, but in a compact pedal footprint.

FEATURES While the Way Huge Smalls stompboxes aren’t sized as typical mini-pedals, they are still small enough to fit into the palm of your hand and are less boxy than their original counterparts, making them super pedalboard friendly. The Smalls Aqua-Puss features 20ms to 300ms of pure analog delay time, with controls for Delay, Feedback and Blend (dry/wet). For chorus and vibrato, the Smalls Blue Hippo has controls for Speed and Depth with a Vibe/Chorus switch to toggle between the two settings. In this MkIII version, the Smalls Russian Pickle Fuzz comes with Volume, Tone and Distortion controls for a full range of gut-punching distortion and hirsute fuzziness. All three pedals are powered by a single 9-volt battery or a 9-volt AC adapter and are true bypass.

PERFORMANCE I actually own and use the original Aqua-Puss stompbox, and after spending some time with the Smalls Aqua-Puss, I swapped my original for the Smalls version to free up room on my pedalboard. Mostly because I found that it’s exactly the same—a warm and defined analog delay, which adds a fat cushion of slap-back ambience or spatial trails of delay. Its clear, room-filling echo has a warm sheen to it that inadvertently acts as a thickening agent for your guitar’s tone. And it also does all the requisite self-oscillation and feedback frenzy that’s popular among the shoe-gazing crowd if you wish for it to act as such.

On the other hand, I don’t own an original Blue Hippo; but here, I’m going to go with the assumption that it’s essentially the same. My first impression is that the Smalls Blue Hippo is a thicker and gooier chorus with less shimmer that clearly eschews other cleaner-sounding chorus units that tend to go for dimensional purity. I love it because it reminds me of early Andy Summers and Permannet Waves-era Alex Lifeson with its compressed chorus tones (think “Freewill”). If swirl is your thing, setting the switch to Vibe offers some serious pulsating textures that can get downright wobbly and liquid.

If Way Huge doled out a Smalls Russian Pickle Fuzz to every comrade, I can tell you there’d be no Cold War. It’s an absolutely warm combo of low rumbling distortion and heat-inducing fuzziness that sounds amazing for guitar or bass. I found its ballsy distortion and gutsy fuzz is both expressed and enhanced by the tone control, which determines the ratio of whether it sounds more like a distortion or fuzz.

● The Smalls Aqua-Puss is a bonafide classic with its pristine analog delay and authentic slapback echo, while the Smalls Blue Hippo’s thick chorus and swirling vibrato are incredibly vintage sounding.
● The Smalls Russian Pickle easily runs the gamut of thunderous distortion and rumbling fuzz with a low-end density suitable for guitar and bass.

The Way Huge Smalls Aqua-Puss Analog Delay, Smalls Blue Hippo Analog Chorus and Smalls Russian Pickle Fuzz now come in a smaller housing, but each one retains the same circuits and revered sounds as the originals.