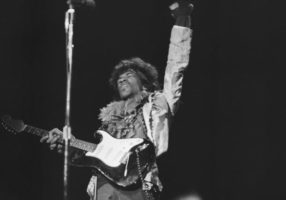 The Six Coolest Stratocaster Solos — Ever

When the curvaceous Fender Stratocaster marked six decades of innovation and influence in 2014, Guitar World celebrated its legacy via 60 players, songs, solos and historical moments. (You can find all our Strat roundups in the October 2014 issue of GW).

Here’s a look at six of the coolest Strat solos—ever!

One of Jimi Hendrix’s most incendiary studio performances, this solo still delivers some of the most aggressive Strat tones ever heard. In the more than four decades since Hendrix recorded it, few solos have come close to its intensity.

Ritchie Blackmore composed this solo like a song unto itself that resembled a J.S. Bach prelude, double-tracking a harmony guitar part before unleashing a fierce flurry of ascending triplets and descending open-string pedal-tone pull-offs at the solo’s climax.

Here David Gilmour says more with a few well-placed notes and heart-wrenching bends than most players ever express in their entire careers. This tour de force performance made “Comfortably Numb” the true climax of Pink Floyd’s The Wall album.

While Stevie Ray Vaughan’s recording of this song owes debts to Larry Davis, who originally wrote it, and Albert King, whose signature licks Vaughan co-opted as his own, it remains one of the finest showcases of his massive tone, stinging vibrato and unique emotional voice.

On “Where Were You,” Jeff Beck takes the Strat into entirely new territory that transcends the guitar’s preconceived limitations by manipulating the whammy bar, volume controls and harmonics—sometimes all at once. The result sounds like angels crying.

View the 6 images of this gallery on the original article