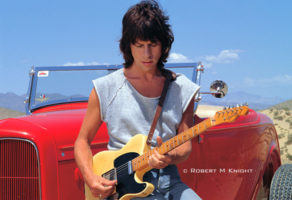 Legendary rock photographer Robert Knight is widely renowned for his lengthy tenure of capturing a wide cross section of highly influential artists, including Jimi Hendrix, Jeff Beck, Jimmy Page, Stevie Ray Vaughan and Slash. His ability to closely connect with and generate trust among the subjects he’s photographed has led to a deep, intimate documentation of significant pop cultural moments over the past half century.

Knight is celebrating his 50th Anniversary with the release of his amazing new book, Rock Gods: Fifty Years of Rock Photography, which is available now on Insight Editions. ​

Even if you aren’t a voracious reader, Knight’s incredibly beautiful photographs and personal stories from his time spent with some of rock’s most legendary artists at the beginning and peak of their careers is worth the price of admission.

We recently spoke with Knight about Rock Gods and some of the artists he’s worked with in this new interview.

What made you decide to write a book about your life and career?

The stars all aligned and the time was right. It was the 50th anniversary of the Jeff Beck tour and my time with Led Zeppelin. We preferred to do a smaller sized book that’s very affordable and aimed at younger people. I’ve even got younger artists I’ve worked with in the book towards the end.

What was it about the music of that generation that appealed to you and made you want to become a photographer?

Growing up as the son of a minister, I was forbidden from any of that music. Then one night at a very young age, I snuck out and saw The [Rolling] Stones when they had Brian Jones in the band, and it electrified me. Later, I found magazines with long-haired guys with weird clothes and guitars. I couldn’t figure out what it was all about, but I knew that it was music. I sent away to an English music company and got records by Hendrix, Cream, The Yardbirds and Pretty Things before they even came out in America. But once I saw the movie, Blowup and the lineup of Jeff Beck and Jimmy Page, that was it for me. I saw what Beck was doing and thought, this is someone I really want to work with.

I want to ask you about a few of the guitarists you’ve worked with and get your thoughts on them. Let’s start with Jimi Hendrix.

I first saw Hendrix back in 1968 at the Avalon Ballroom. I had heard his music before, but hearing it on your hi-fi was a lot different than when you were being pummeled by three Marshall stacks [laughs]. I remember my mouth dropped open and I was just mesmerized by what was going on. It was bigger than life. Then when I met him, he was this sweet, shy guy who was very humble. That’s what you came away with. He was this bombastic thing on stage and then the total opposite off of it.

What about Led Zeppelin?

Back in the summer of ’68, I was working with Jeff Beck and he mentioned that Jimmy [Page] had this amazing new band that was coming to America. He said he thinks they’re called The New Yardbirds. So, I went talked to Rolling Stone magazine and convinced them to send me down to shoot the band when they came into L.A. [in the meantime, the band had changed their name to Led Zeppelin]. I showed up at The Whisky that afternoon and they wouldn’t let me in because I wasn’t twenty-one. I wound up spending the afternoon with the band at their hotel and they brought me in to the show as road crew [laughs]. Because I was only allowed to be on the stage, that’s how I was able to get those fantastic shots of Zeppelin. The ironic thing was, I was the only photographer there.

In the book, you also discuss about being the only photographer there the night Stevie Ray Vaughan died.

I only tell a little bit of the story because the synchronicity of it was so bizarre. Stevie had asked me to come back to Alpine Valley, Wisconsin with him because he was doing a two-day photo shoot with Eric Clapton, and he wanted me to be the photographer. We were meant to shoot in the afternoon on the first day but Eric had somehow forgotten about it. So, Eric pulled me aside and said, “Listen. You stay and talk with Stevie. I’ll l let all the other press photographers shoot tonight, and you’ll be the only one to shoot tomorrow.” So, I’m sitting there talking with Stevie and during our conversation he starts telling me that he doesn’t know how much longer he must live. He told me about how he’d almost died from a drug overdose a few years earlier and that God only gives you so much time.

The next night, Stevie pulls me aside and says, “I’m going to do an encore song, “Voodoo Child,” just for you and I tonight. Make sure you get that because it’s between you and me. So, I shot the show but when the encore came, it was like liquid nitrogen. My hands froze, and I couldn’t even hold the camera because it was so cold. I actually had to leave in the middle of the song because I had goose bumps. After he had finished the song, Stevie comes up to me and says, “Why did you leave?” I told him the story about it being cold, and then he pulled up his sleeves and showed me his own goose bumped arms. That’s when Eric said, “Hey, there’s an extra space on one of the helicopters if anyone wants to leave early.” Stevie wanted to go see Buddy Guy, but I told him I didn’t want to go. The last thing he said to me before he left that night was, “Listen, if anything ever happens to me, you’ll know me when you hear me.” I remember being on such a high because I had just shot the most incredible day. But on the way back, I suddenly felt really depressed, and in the morning, I found out why.

Of all the artists and events you’ve covered, who or what stands out as most special?

Anything that I did back in the day with Hendrix, Beck or Stevie was amazing. Jeff Beck is one of the greatest guitar players. I’ve also worked with a lot of blues guys. Albert Collins was a friend who I thought was incredible. And there wouldn’t be a Jimi Hendrix or a Jeff Beck if it weren’t for guys like Collins and Buddy Guy. But to answer your question, it’s probably when I worked with Slash. I shot a lot of stuff around the Velvet Revolver and The Conspirators period. He’s got such an original sound. You could even put his shadow up on the wall and people would immediately know who he is. There’s something special about that guy, for sure.