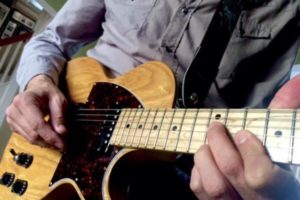 So You've Bought a B-Bender: Get Started with This Handy Country/Blues Lick

Hi there. Welcome back to The Next Bend, the Guitar World column dedicated to B-bending guitarists, guitars, gear, news, licks, songs and more.

For the uninitiated, a B-bender is a contraption (the perfect word for it) that lives in- or outside your guitar and allows you to pull—usually with some sort of arm, palm, shoulder or hip movement—your guitar’s B string up a perfect whole step. So, a B note would suddenly become a C# (or a C, if you don’t bend the string all the way).

Although this simple explanation might not convey the wonder of a B-bender (it sounds more like an exercise regimen, to be honest), let’s just say the contraption allows guitarists to create sounds that would be impossible otherwise. And it sounds cool as hell. Or “cool as heck” if that offends anyone.

Anyway, for today’s column, I decided to grab my trusty grey shirt and my Gibson Music City Jr. with B-Bender (a limited-edition guitar Gibson issued in 2013; it’s still on the company’s website, which makes me wonder if it’s coming back into production) and shoot a few basic B-bender licks.

By the way, the only other person I’ve ever spoken to who has this guitar is Charlie Starr of Blackberry Smoke. We speak about the guitar briefly in this story.

A big shout out to the gang at the Seymour Duncan Custom Shop, who aided me in my quest for two P90-sized humbuckers, which I recently installed to replace the guitar’s stock Gibson P90s. (I’m not a P90 guy.)

The first couple of licks we shot in GW’s underground lair are indeed fairly basic; they’re sort of a primer for guitarists who—for some weird reason—have bought a B-bender-equipped guitar and don’t really know what to do with it. After all, some of the B-bender videos on YouTube are fairly useless. Just sayin’!

This first lick is basically a brief yet self-contained country/blues song (feel free to steal it—and thank me in your liner notes) in C, but it can be played up and down the neck in any key. It’s got elements of blues and country, and it starts off on the eighth fret in a very standard, “Hey, let’s play some upbeat blues in C major” sorta way. There’s no tab for this lick, but I don’t think that’ll be an issue. Enough with the tab, folks; use your ears and eyes.

If you have any questions, feel free to write me at damian@guitarworld.com. I’ll try to reply before 2021. By the way, this guitar uses a Joe Glaser bender and a modified Gibson Nighthawk bridge. It’s also set up so that I could turn it into a G-bender, which I won’t be doing anytime soon.