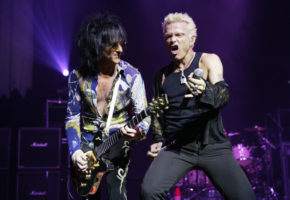 I guess you could say this about a lot of songs—but almost nothing screams “Eighties” like the opening guitar lick to Billy Idol’s “Rebel Yell.” The song, which was written by Idol and his longtime guitarist, Steve Stevens, actually charted twice—once in 1983 and again in 1985.

In late 2014, Stevens got together with TC Electronic to spill the beans about the lick’s bluesy roots—and to show you how to play it correctly (1:27). In the clip, he also runs through his verse (2:30) and bridge (3:48) guitar parts. Back in the day, listeners thought Stevens’ opening riff was actually a mix of guitar and keyboards—but it’s all Stevens.

Below (bottom video), be sure to check out another gem from late 2014—a stripped-down but very exciting and emotional acoustic rendition of “Rebel Yell” as performed by Idol and Stevens at the CBGB Music & Film Festival in New York City.