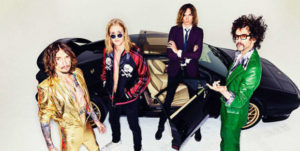 The Darkness have announced Live at Hammersmith. Recorded at their December 2017 show at London’s Eventim Hammersmith Apollo, it’s the band’s first live album across all formats.

To mark the occasion, The Darkness have made two songs from the album—which is set for a June 15 release via Cooking Vinyl—available for free download with preorders. You can hear one of them, a rollicking version of “I Believe in a Thing Called Love,” below.

“The Darkness is untamed,” said frontman Justin Hawkins in a statement. “It cannot be caged. Some very clever recording engineers have discovered a way to capture its essence; all that remains is for us to release it back into the wild.”

“Life is about experiences, not possessions,” he continued. “This is your opportunity to possess the experience of The Darkness live, as perceived by your ears, leaving your eyes free to scan the road ahead for obstacles, or to watch Emmerdale with the sound off, or to mould clay, or to darn socks or to look at the beautiful artwork in this magnificent gatefold. Release yourself into The Darkness—Live at Hammersmith.”

You can preorder Live at Hammersmith right here, and check out its tracklist below.