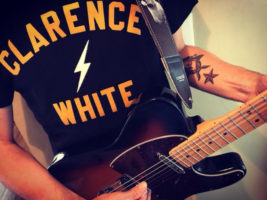 The Key to Understanding the Minor Pentatonic Scale

The minor pentatonic scale is quite possibly the most used and, suffice it to say, over-used scale on the guitar. The open strings themselves even make up the notes of the E minor pentatonic scale. Still, this scale’s importance cannot be underestimated, as it is used in so many genres of music, from rock and blues to country and bluegrass.

With this being a quintessential scale for guitarists to learn, I’ve seen many who struggle with either the memorization of the patterns or how to connect the patterns and make them musical. In this lesson, all of that will be demystified.

The prefix, “penta,” meaning five, tells us there are five notes in this scale. Just as one would shift through a scale to create different shapes for modes, the same is done with this scale to generate five distinctive patterns on the fretboard. Memorizing these five patterns in sequence is often the typical process for beginners; however, rote memorization of shapes might not easily translate into the performance process.

With each “box,” to which they are sometimes referred, we see separate patterns moving across the fretboard. And the tendency can be to think of them simply as patterns as opposed to musical scales. Altering the learning process by looking at the scale as a one-octave series of notes in only one pattern rather than five individual patterns will allow a player to move effortlessly across the fretboard and be able to apply this scale in a more musical fashion much sooner.

In the key of E minor, the notes within the minor pentatonic scale are E, G, A, B and D. Playing from E to E generates a six-note series to complete the octave. To have a single pattern that works anywhere on the fretboard, we’ll first find the fourth of the key, which is the note, A. From this point, we can find an A anywhere on the fretboard, and it will generate a six-note octave pattern from A to A when using fingers 1-3, 1-3, 1-3 (unless an A is chosen on the second or first string, in which case there would only be four or two notes, respectively).

Now, instead of looking at five completely different patterns, we have one pattern that flows seamlessly across the neck. Using this form of visualization, the minor pentatonic scale instantly becomes easier to maneuver. And this device works not only in the key of E, but for any key. If you begin the sequence on the sixth string, you’ll get two full octaves, and then four notes ending on the tonic on the first string. If you begin on the fifth string, you’ll get two full octaves ending on the fourth of the key.

Don’t let the theory be overwhelming. It’s a simple pattern, and it allows for fluidity to be realized much faster. Once mastered (which doesn’t take long), the rest becomes much easier to learn.

Matthias Young has studied music performance and education at Berry College, Georgia State University, and Boston University. He’s published articles for Guitar World and The Guitar Foundation of America’s Soundboard. He is the author of several guitar methods, including the best-selling Metal Guitar Method and Guitar Quest: Essentials. If you’re interested in studying with Matthias, he offers online lessons over Skype, or you can learn from hundreds of videos from multiple instructors available at Guitar Compass. Follow him on Facebook, Twitter, YouTube and Instagram.