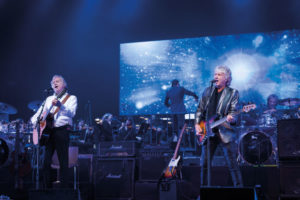 Last year, the Moody Blues hit the road to celebrate the 50th anniversary of their breakthrough album, 1967’s Days of Future Passed. Now, the legendary British band—which still features classic-era members Justin Hayward, John Lodge and Graeme Edge—will release Days of Future Passed Live, a new DVD, Blu-ray and 2CD that captures the band (with a full orchestra, no less) at one of their best 2017 shows.

The concert, which was shot at the Sony Centre for the Performing Arts in Toronto, kicks off with a slew of favorites from their lengthy—not to mention Rock and Roll Hall of Fame-worthy—career; at the midway point, they shift gears and dive into Days of Future Passed, one of the landmarks of early progressive rock.

The set, which will be issued March 23 via Eagle Rock Entertainment, includes “Nights in White Satin,” “Dawn Is a Feeling” and “Tuesday Afternoon (Forever Afternoon),” plus “I’m Just a Singer (in a Rock and Roll Band),” “Isn’t Life Strange,” “I Know You’re Out There Somewhere,” “Question,” “Ride My See-Saw” and many more. You can see the full track list below.

Days of Future Passed Live Track ListPart One: Moody Blues in Concert (CD Disc 1)1. I’m Just a Singer (In a Rock and Roll Band) 2. The Voice 3. Steppin’ in a Slide Zone 4. Say It with Love 5. Nervous 6. Your Wildest Dreams 7. Isn’t Life Strange 8. I Know You’re Out There Somewhere 9. The Story in Your Eyes

How to play guitar in 3 diverse Fender Telecaster styles

Adrian Smith talks fishy tour stories, from falling in front of 20,000 people to being recognized while angling