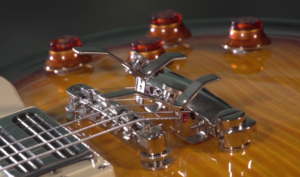 The Pitch Pilot, an innovative mod that allows you to transform your guitar into a bender on any string, has launched a Kickstarter campaign. You can view the campaign here, and be sure to check out our review of the product as well.

The Pitch Pilot allows for new musical expressions, allowing guitarists to expand their sound repertoires. After a simple installation, any string can be manipulated in pitch, bending the note up by as much as three semi-tones or down seven.

Similar in use to a whammy bar, this low profile device stays out of the way until—using nothing more than finger or hand pressure—the guitarist bends the note up or down with a simple push or pull on the handle, on a single string. The remaining strings remain in standard tuning, opening up new ways to play. With a quick and simple alteration, guitarists can create endlessly dynamic musical sounds unlike anything previously possible.

Today, a Pitch Pilot model compatible with Gibson Les Paul and Gibson-type bridges is already in production and available for sale on the company’s website. The goal of the Kickstarter campaign is to produce a Pitch Pilot compatible with the Fender Telecaster and Stratocaster. The prototype is finalized and ready for tooling and production, but the company needs additional funds to complete the final steps.

Whether you play country, jazz, rock, R&B or heavy metal, Pitch Pilot will allow you to add new and unique elements to your sound. Support the campaign and you can have a Pitch Pilot shipped to your door.

To find out more, visit the Kickstarter campaign here, or visit pitchpilot.com.