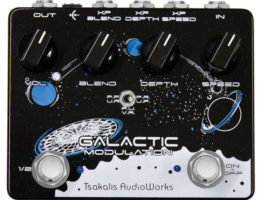 Tsakalis AudioWorks has introduced its new Phonkify and Galactic pedals. The Phonkify is a wah-wah pedal enhanced with octaves, while the Galactic is a multi-modulation pedal.

The Phonkify was heavily influenced by the funk and soul music of the Sixties and Seventies, and the gear used to make it. It features two modes of juicy envelope filter (Smooth & Nasty) which turn into wah at the minimum ‘sensitivity’ setting, in addition to an octave up/down effect.

It also features an expression jack, letting users control the frequency range of the envelope and wha effects, and a dedicated foot-switch for the octave effect.

The Galactic is a multi modulation pedal featuring five basic effects (Phaser, Univibe, Vibrato, Rotary and Flanger). It’s possible to use them separately or in pairs, blending them together via a Blend control.

Three expression jacks let users control the speed and depth of the effects, as well as how users choose to blend them.

The Galactic is available now for €240.

For more info, head on over to tsakalisaudioworks.com.