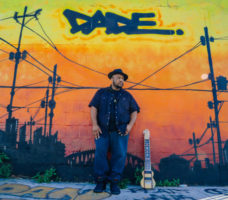 “This record is a record about me,” Collier says. “It’s telling a story of who I am, where I’m from, and where I’m going…I’m rooted in a lot of genres, so I’ve never really had a focus or to buckle down”—which is why Exit 16 features infectious tracks like “Supernatural Encounters” sitting alongside “Spike,” a song that finds Collier shredding in the spirit of Jimi Hendrix, an obvious influence. “I think a song like ‘Spike’ is about my future,” Collier says. “My goal was to see how we can expand this guitar, this steel.”

You can see far he expanded it by pressing “Play” below.

Exit 16 represents a potent mix of blues, gospel, rock and, in Collier’s words, “dirty funk swampy grime,” as overseen by League, who produced the disc.

Collier, who was brought up in the House of God Church in Perrine, Florida, built his “sacred steel” guitar prowess alongside his uncles and cousins in the Lee Boys, known for their spirited, soul-shaking live performances. On his own, Collier has become a sought-after talent on record and on stage, performing alongside the Allman Brothers Band, the String Cheese Incident, Buddy Guy, Umphrey’s McGee, Los Lobos, Robert Randolph, the Tedeschi-Trucks Band and the Del McCoury Band.

And, despite this story’s “pedal steel” headline, Collier also happens to be a transcendent talent on lap steel guitar. He’s so proficient, in fact, that he’s affectionately known as “The Dr.”

“My mission is touch and heal people through music,” he says. “That’s always been my mission, whether it’s in the church or in a club. I think people feel better about themselves after I play. That’s powerful, my man! I’ve been blessed to have that going for me. That’s my gift.”

For more about Collier and to see his scheduled shows, visit rooseveltthedr.com and follow along on Facebook.