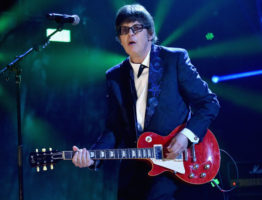 The Cars were among the honorees at this year’s Rock and Roll Hall of Fame induction ceremony in Cleveland this past Saturday night.

“New Wave, Post Punk, Power Pop. Tonight, they’re all riding together into the Rock and Roll Hall of Fame,” said Brandon Flowers of the Killers, who introduced the band. “On the back of what is now established as one of the greatest debut albums ever made, the Cars were named ‘Best New Artist’ in the 1978 Rolling Stone Readers Poll. Forty years later, they still sound like a new band to me.”

The Cars—whose lineup was bolstered by Weezer bassist Scott Shriner Saturday night—ran through a handful of their many hits after Flowers’ speech, including “You Might Think,” “My Best Friend’s Girl,” “Moving in Stereo” and “Just What I Needed.” The Cars are Ric Ocasek on vocals and guitar, Elliot Easton on lead guitar, Greg Hawkes on keyboards and David Robinson on drums. Original bassist Benjamin Orr (who also sang some of the best-loved songs, including “Just What I Needed”) died in 2000 at age 53.

You can check out “Just What I Needed” above—and everything else below. Enjoy!