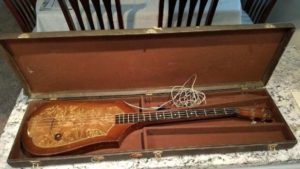 An ultra-rare Audiovox 736, the first electric bass guitar ever made, was sold on Ebay yesterday for $23,850. According to the listing, the instrument was one of only three Audiovox 736s left in the world.

After hearing years of rumors (and after a good deal of digging,) historian and writer Peter Blecha discovered that Paul H. Tutmarc actually created the modern electric bass guitar—frets, pickups and all—back in 1936, 15 years before Fender’s Precision Bass made its debut. Tutmarc—a Seattle-based pioneer in electric pickup design who throughout the Thirties and Forties made a number of guitars and amplifiers under the Audiovox brand—first gave the bass to his wife Lorraine, who used it while performing with the Tutmarc family band. Tutmarc also sold copies to various gospel, Hawaiian, and country players.

With a price tag of $65 (around $1,150 today) though, the Audiovox 736—despite some success in the Seattle area—never took off, and Audiovox folded in 1950. Today, the basses remain extremely rare, with only three still known to exist. The other two—aside from the recently auctioned instrument—are held in Seattle’s Museum of Pop Culture and by a private collector.

You can watch a demo of the instrument below.