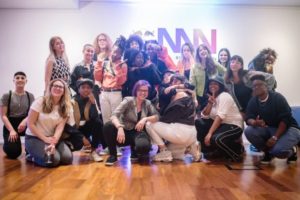 Last month’s #NormalNotNovelty workshop featured a truly amazing line up, with producer and DJ AQWEA showcasing her production techniques, DJ Flava D talking about how to kickstart a career behind the decks, as well as her own career so far, and sound engineers Thea Cochrane and Lívia Nagy discussing their journeys to date.

We had the pleasure of taking this event on the road, this time to Brighton, where we were able to open it up to our fellow female producers, engineers and DJs outside of our London hub. We were situated at the heart of the city in Lighthouse Arts, an organisation known for its contemporary digital culture. It’s an impressive modern space that hosted a series of interesting events throughout May. ​

Our latest event had a slight twist, with the format changed to allow the entire audience the opportunity to hear Nagy and Cochrane discuss their work, with mastering engineer Katie Tavini hosting proceedings. Cochrane explained how her journey took her from sound engineering in university to working as part of the sound archiving project at the British Library. This role primarily focuses on sound restoration and preservation of recordings by digitalising from a variety of analogue formats so they cannot be lost.
Nagy’s journey, meanwhile, has taken an altogether different path. Although she studied sound engineering at university, her work experience took her to the National Theatre where she operates as the main live sound engineer.

There was immediate interest from the audience at how diverse sound engineering can be, with many of the questions centred around how they both ended up in their respective fields.
​The second part of the event was split into two sections: a DJ Q&A with Flava D, hosted by Madam X, and an electronic production demonstration that I hosted with AQWEA.
​Hailing from south east London, AQWEA spoke about her path in the music industry so far, her trials and tribulations and her reasons for getting into production.

With many of the audience members fairly new to the art of production, AQWEA demonstrated the very basics of starting a track. The audience’s excitement came to life once they saw and heard the bare bones of her production come together, immediately sparking a surge of interaction, with questions leading to what software is best to start off with, as well as the specifics of which plugins she uses and why.
Following the workshops held by AQWEA and Flava D, the rest of the evening was spent with those in attendance sharing ideas and discussing talents and personal journeys.

This part of proceedings at #NormalNotNovelty nights is always special, as women who are just starting out in the audio world have the opportunity to speak with industry leaders and everyone else in between.
What I personally enjoyed from this particular night was seeing just how much knowledge and inspiration the audience gained from the experience. I was constantly told how amazing the workshops were and how cool it was to be a part of something so poignant. It’s all a step in the right direction and we were very lucky to have been able to share this with the women of Brighton.

You can read our interview with Liv Nagy here.