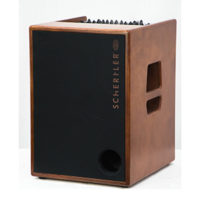 Schertler to debut ‘Roy’ and ‘Teddy’ at Musikmesse

Schertler says Roy is its new top-of-the-range combo amplifier for acoustic instruments. The 400W, 7-channel amp, ‘provides a powerful yet lightweight system that is perfect for both stage and studio’. ROY includes 4 input channels with various mic / instrument combinations; inserts (as on a professional mixer), 3-band EQ and phantom power; an additional unbalanced instrument input channel; a stereo input channel for playback devices and an FX return / additional input channel.
ROY has the same hi-end Class A preamp found in other Schertler amplifiers. Its Master section features both a digital reverb and a new digital Multi-Effect (on a separate bus), as well as DI/Line/Aux Outs and a headphone pre-amp.

Developed for theatre and concert sound applications, TEDDY is Schertler’s new 200W compact stage monitor. Its “low profile” design is intended for edge-of-stage use without impeding audience views. TEDDY features a coaxial speaker for constant sound directivity, with a specific inclination angle that makes it suitable for both standing and seated performances. For more extensive stage coverage, several units can be chained together using XLR input and output connectors – all connected to the same signal path.

The post Schertler to debut ‘Roy’ and ‘Teddy’ at Musikmesse appeared first on Music Instrument News.