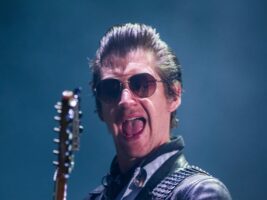 British indie-rockers Arctic Monkeys have announced their brand new album, The Car which is set for release later this year.

The record will be the band’s seventh studio album, and will be their first LP release in four years following 2018’s Tranquillity Base Hotel & Casino. The band released a live album in 2020, Live At The Royal Albert Hall, a concert which raised £250,000 for War Child UK.
According to a press release (via NME), The Car “finds Arctic Monkeys running wild in a new and sumptuous musical landscape and contains some of the richest and most rewarding vocal performances of Alex Turner’s career”.
It’s set to feature new track I Ain’t Quite Where I Think I Am, which the band performed for the first time during their show at Zurich Openair festival in Switzerland last night (23 August). You can watch the performance of the track in the video below:

The record has been produced by James Ford whose production discography features work for the likes of Gorillaz, Florence + The Machine, and foals, as well as previous Arctic Monkeys material, including the iconic AM album. The Car will host 10 tracks, which are as follows:

Drummer Matt Helders shot the cover art for the record, he’s previously stated that this record picks up where Tranquillity Base Hotel & Casino left off. Speaking to DrumathonLIVE 2022 he said, “I mean, it’s never gonna be like ‘R U Mine?’ and all that stuff again, you know, the heavy riffs and stuff.”
You can pre-order the band’s new album here.
The post Arctic Monkeys announce new album The Car appeared first on Guitar.com | All Things Guitar.