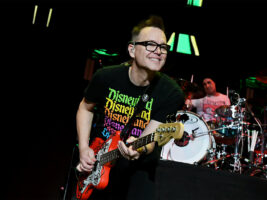 Blink-182’s Mark Hoppus has beaten cancer: “Today is an amazing day and I feel so blessed”

Blink-182’s Mark Hoppus has shared that he is now “cancer free” after completing chemotherapy.

The 49-year-old musician broke the heartening news on social media yesterday (29 September) after visiting his oncologist.
“Just saw my oncologist and I’m cancer free!” Hoppus wrote on Twitter. “Thank you God and universe and friends and family and everyone who sent support and kindness and love.”
He added: “[I] still have to get scanned every six months and it’ll take me until the end of the year to get back to normal but today is an amazing day and I feel so blessed. Can I get a W in the chat?”

Hoppus went public with his cancer diagnosis back in June, saying that he had already been undergoing chemotherapy for several months. The following month, he revealed the cancer to be 4-A diffuse large B-cell lymphoma, the same cancer which his mother survived.
Last week, ex-Blink-182 guitarist Tom DeLonge said that his friendship with Hoppus was “completely repaired” since learning of his former bandmate’s illness.
“We weren’t really talking much at all, maybe once every couple of months. A little text here and there,” DeLonge told Zane Lowe in an interview on Apple Music.
“But now, we talk multiple times a day. So it’s like we’ve been able to completely repair that friendship and really cut to the depth of who we are as people and what this is all about.”
The post Blink-182’s Mark Hoppus has beaten cancer: “Today is an amazing day and I feel so blessed” appeared first on Guitar.com | All Things Guitar.