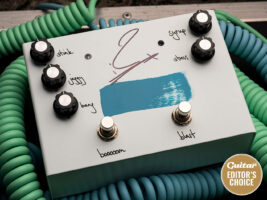 Biffy Clyro’s Simon Neil knows a thing or two about making loud, angry noises. So when his guitar tech Richard Pratt set up his Gone Fishing Effects brand, it was only natural that the pair would collaborate on a signature pedal with the brief, according to Pratt that, “it had to be the loudest pedal we can make”.

The result is the Booooom/Blast (named after Biffy song Booooom, Blast & Ruin), which pairs separate overdrive and fuzz circuits in the same box: Blast a transistor fuzz effect and Booooom a germanium diode overdrive. The unit lets you combine gritty, amp-like roar with fuzz that can morph from a polite 1960s tone into joyous square wave rumble with infinite sustain. Both circuits stack exceptionally well and have superb clarity.
The pedal’s initial limited-edition run has already long sold out, so if you still want to experience Gone Fishing Effects’ Booooom/Blast unit for yourself, you’ll have to enter our competition and hope you’re the lucky winner. To be in with a chance, simply head to the link below and answer the following question.
Good luck!
﻿Loading…
The post Win! A Gone Fishing Effects Simon Neil Booooom/Blast worth £299 appeared first on Guitar.com | All Things Guitar.