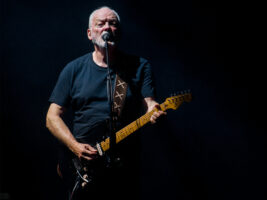 David Gilmour calls for peace in Russia-Ukraine conflict: “There will be no winners in this war. Putin Must Go”

David Gilmour has spoken out against Russia’s invasion of Ukraine, calling for peace in a statement on social media.
READ MORE: Brian May, Paul Stanley, Pearl Jam: The music world reacts to Russia’s invasion of Ukraine
In a tweet posted Tuesday (1 March), Gilmour urged Russian soldiers to “stop killing your brothers.”
“There will be no winners in this war,” the 75-year-old guitarist wrote. “My daughter-in-law is Ukrainian and my grand-daughters want to visit and know their beautiful country. Stop this before it is all destroyed.”
He concluded his tweet with a definitive message: “Putin must go.”
Gilmour also attached the music video to his 2015 anti war song, In Any Tongue, featuring lyrics from his wife and musical collaborator, Polly Samson. The six-minute long clip features hand-drawn animations by artist Danny Madden.

Russian soldiers, stop killing your brothers. There will be no winners in this war.
My daughter-in-law is Ukrainian and my grand-daughters want to visit and know their beautiful country. Stop this before it is all destroyed.
Putin must go pic.twitter.com/VE4oMsUIRf
— David Gilmour (@davidgilmour) March 1, 2022

Gilmour isn’t the only artist calling for peace, as some of music’s biggest names have, too, taken to social media to voice their concerns for the Ukraine.
Stevie Nicks, in a statement on Twitter, slammed Russian President Vladimir Putin, sharing an entry in her journal: “This is Hitler coming back to haunt us.”

Twisted Sister’s Dee Snider tweeted in solidarity with Ukraine, endorsing the use of the band’s song We’re Not Gonna Take It as a rallying anthem for the Ukrainian people.

People are asking me why I endorsed the use of “We’re Not Gonna Take It” for the Ukrainian people and did not for the anti-maskers. Well, one use is for a righteous battle against oppression; the other is a infantile feet stomping against an inconvenience.
— Dee Snider (@deesnider) February 27, 2022

Nadya Tolokonnikova, a member of Moscow-based punk band Pussy Riot, called Putin “a dangerous dictator who has to be stopped” in a recent interview with Rolling Stone. The feminist punk group has been selling NFTs to help raise funds to support Ukraine, raising close to $3 million in 24 hours.
On 24 February, Russia launched an attack on Ukraine, targeting its capital of Kyiv amongst other cities. At press time, at least 352 civilians civilian casualties have been reported per Al Jazeera.
The post David Gilmour calls for peace in Russia-Ukraine conflict: “There will be no winners in this war. Putin Must Go” appeared first on Guitar.com | All Things Guitar.