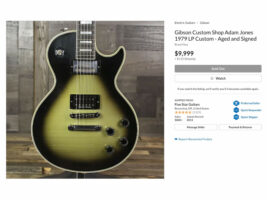 According to an online leak, it looks like Gibson is reissuing Tool guitarist Adam Jones’ signature 1979 Silverburst Les Paul Custom.

The leak was first picked up by the Trogly’s Guitar Show, who stumbled across a now-deleted Reverb listing for the reissued instrument.
Compared to the original run of signatures, the new guitar looks to split the difference between the Vintage Old Stock edition and the Aged And Signed edition. While the former had featured some light relicing, and the latter had featured Jones’ signature and some heavier playwear, the new 2021 reissue features Jones’ signature but a less dramatic ageing job.
However, the price instead matches that of the original runs’ Aged And Signed model – $9,999. Some viewers also informed Trogly that the official release date will be 2 November, but that’s not been officially confirmed.
Trogly notes in his video that the reissue might not be received well by some owners of the original guitar. Many sellers have used its limited nature to inflate their prices – one listing on Reverb is currently asking for $23,995 for an Aged And Signed model, almost $14,000 more than it was originally sold for.
Stay tuned to Guitar.com for any official updates on the reissue. See Trogly’s video on the leak below.