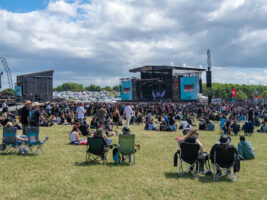 Download Festival boss Andy Copping has spoken out on the importance of inclusion at festivals, noting that “all festivals” should “look at how diverse they are”.

The popular rock festival which takes place in Donington Park, Leicestershire, revealed its line up for 2023 earlier this week, confirming headliners as Bring Me The Horizon, Slipknot and Metallica, who will be performing for two out of the four nights with no song repeats.
Next year will see Download have its first ever four-night run to celebrate its 20th anniversary, and following the positive buzz around the summertime fest, Copping spoke to NME on the importance of ensuring lineups are diverse.
“All festivals need to look at how diverse they are,” he said. “It’s something we’ve tried to do over the years, and we’ve still got a long way to go but it’s encouraging there’s so many great, female artists out there. Hopefully we can help give them a platform. We’re a long way down the line from where we were, but there’s still room to improve and we want to do that year on year.”
2023’s line up features artists such as Nova Twins, Witch Fever, Evanesence, The Distillers and more, with further artists to be confirmed. Copping also spoke on his feelings towards including newer, upcoming bands on the roster.
“You don’t want to rely just on the heritage acts. Download fans are a lot more open to giving newer artists opportunities than they were, say, ten or 15 years ago. We can’t just sit there and expect the same headliners year in, year out. We’ve got to try and freshen it up a little bit,” he declared.
Copping told NME that he is “very happy with the lineup”, you can find out more and get tickets at downloadfestival.co.uk.
The post Download Festival boss says “all festivals need to look at how diverse they are” appeared first on Guitar.com | All Things Guitar.