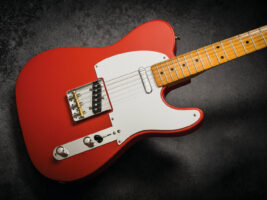 Fender could be dipping a toe into the waters of the NFT world, new trademark filings suggest.

READ MORE: Gibson could be launching NFTs of its iconic guitars, according to recent trademark filings

The trademark filings include three depictions of Fender’s headstock designs as well as word marks for “Stratocaster,” and “Fender.” The headstock designs include two Strat-style headstocks and the traditional Telecaster headstock.
While the company has already trademarked these for physical guitars, these marks are specifically in the context of “virtual goods, namely, digital artwork, photographs, videos, and audio recordings featuring music and musical instruments,” all in the form of “non-fungible tokens (NFTs) and other crypto-collectibles.”
There are currently no official details outlining Fender’s plan for NFT trademarks.
The filings follow a similar move from Gibson, which also filed NFT-related trademarks for some of its most iconic models.
In both cases, it’s possible that the filings are simply a response to the sale of unlicensed guitar NFTs. Platforms such as OpenSea are already host to a few seemingly unofficial Gibson Les Paul and Fender Stratocaster NFTs – these are most likely not looked kindly upon by the owners of the trademarks for the respective physical designs, and their sale could be complicated by these recent trademark filings.
While Fender and Gibson have made a tentative look at entering the NFT space, other companies have jumped straight in. Last November, Japan’s ESP launched its first set of limited-edition guitar NFTs at $100 apiece.
Outside of manufacturers, guitar figures such as Joe Bonamassa, Matt Bellamy, Yngwie Malmsteen and Keith Richards of the Rolling Stones have dropped their own NFTs across 2021.
The post Fender could launch official Strat and Tele NFTs appeared first on Guitar.com | All Things Guitar.