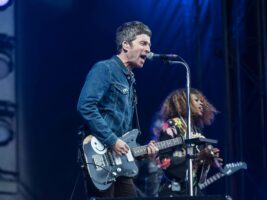 Gone are the glory days of rock ‘n’ roll candidness, or so says Liam Gallagher, who has hit out at those trying to ‘cancel’ him, insisting that they should try it in person or “fuck off”.

Speaking on The 2 Johnnies Podcast, the former Oasis frontman shared his thoughts on modern day cancel culture, calling those involved in it “fucking squares”.
“Who the fuck are these people cancelling you, anyway? Like, fuck off,” Gallagher said. “Unless they come around to your house and say you’re cancelled. You’re still going to do your fucking thing, they don’t speak for everyone, do they?”
The rocker continued: “The cancelling people just speak for the cancelled world, they don’t fucking speak for everyone. You can still go and do your gig, there are people out there who are going to like what you’ve got to say. Bring it fucking on, you fucking squares!”
Gallagher also dismissed the notion of him being the last great rock star, saying that he’d hate to think that because that would be “just fucking sad”.
“I hear that all the time but you can’t be there’s got to be someone on the way up now,” said the 49-year-old star. “I just think this world now, the world we’re living in, there’s a lot of people out there who are scared to say what they want, I’m sure they’d get cancelled and all that tackle.”
Meanwhile, Gallagher’s third solo album C’MON YOU KNOW is slated for release on 27 May. He’s previewed the record with the singles Everything’s Electric, Better Days and the album’s title track.
Listen to the full interview below: