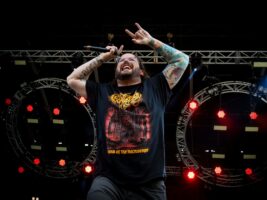 Founder and lead singer of death metal band Black Dahlia Murder Trevor Strnad has died at the age of 41.
Strnad’s bandmates confirmed the news on their Instagram account earlier today (11 May): “It is with deep sadness that we announce the passing of Trevor Scott Strnad. Beloved son, brother, and Shepard of good times, he was loved by all that met him. A walking encyclopedia of all things music. He was a hugger, a writer, and truly one of the world’s greatest entertainers. His lyrics provided the world with stories and spells and horror and whimsy. It was his life to be your show.”

A post shared by The Black Dahlia Murder (@theblackdahliamurder_official)

No cause of death was provided, though the band did leave number for the National Suicide Prevention Lifeline at the end of their message.
While the band’s lineup had undergone many changes over the years, Strnad is one of the two original members — alongside guitarist Brian Eschbach — present since the band’s founding in 2000.
Named after the infamous and unsolved 1947 murder of actress Elizabeth Smart, the Michigan-based metal act released a string of independent EPs before signing with their current home label Metal Blade Records. The Black Dahlia Murder went on to release their first LP Unhallowed in 2003 followed by eight more studio records in the subsequent years, including their most recent album Verminous in 2020.
The band’s 2011 record Ritual was their biggest chart success, peaking at No. 31 on the Billboard 200 Album Chart.
Strnad described the group’s last album as “the biggest evolutionary leap we’ve ever taken”, saying that “It’s a very colourful, moody, and charismatic album that experiments with new sounds and ideas without losing the cutthroat Black Dahlia edge… Each one is a living, breathing entity that will stand on its own as some of the best music this band has ever created.”
As has been their MO since inception, the death metal band was scheduled for a Verminous album tour later this year.
The post Trevor Strnad, founder and lead singer of Black Dahlia Murder, dies at 41 appeared first on Guitar.com | All Things Guitar.