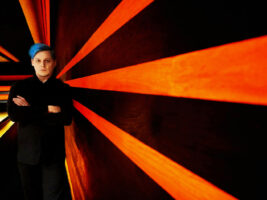 Jack White has opened up a new dedicated website to showcase his multimedia art and design works, spanning more than 20 years of his career.

The new site showcases everything from White’s influences, photography, film directing, vinyl concepts, sculptures, and – perhaps most excitingly for us – his musical instruments and hardware.
The hardware side includes Third Man Records’ various collaborations with effects pedal manufacturers. Overseen by White, these consist of some incredibly unique distortions, fuzzes, and most recently the Third Man x Coppersound Triplegraph, an interesting telegraph-style killswitch and octave pedal.
There’s also various other guitars Jack has modified or built himself over the years. A notable inclusion is the Diddley Bow, the single-string instrument that White builds in the opening scene of the 2009 documentary It Might Get Loud. The Diddley Bow was displayed at the Museum of Design Atlanta as part of their 2019 exhibition Wire & Wood.