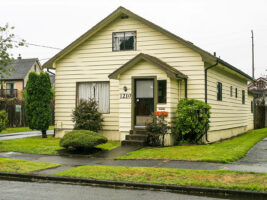 The childhood home of Kurt Cobain has now been recognised as a Washington State landmark and will be turned into an exhibit fans passing through Aberdeen can visit.

The one-and-a-half floor property spans 1,500 square feet and was the grunge icon’s home from 1968 to 1984. According to its current owner, Lee Bacon, the house will be restored to pay tribute to the Nirvana frontman’s early years in all its vintage glory.
“Our goal is to make the house a tribute project to Kurt’s early life and career, with museum detail,” Bacon told Rolling Stone. He added that restorations were now “90 to 95 percent” complete.
The music room of Cobain’s childhood home / Photo: Suzi Pratt
The motion to preserve the house as a Washington State landmark was approved without contest by its Department Of Archaeology And Historic Preservation. Allyson Brooks, executive director of the council, said it was “rare to have a childhood home considered” but that “everyone on the council recognised the importance of the place”.
Bacon will complement the restoration project with a space – taking up 8,000 of a 25,000-square-foot building he purchased in downtown Aberdeen – dedicated to housing artefacts, memorabilia and photographs of Cobain. The Tribute Lounge and Gallery Cafe will “tell the story of the house” and of Cobain’s youth in Aberdeen.
The post Kurt Cobain’s childhood home to be restored to its vintage glory and turned into a museum appeared first on Guitar.com | All Things Guitar.