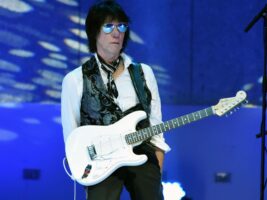 Guitar virtuoso Jeff Beck has spoken out about how, when he first began playing the instrument, he didn’t expect rock music to have the longevity to still be around today. The guitarist also shares his unwavering fondness for the Stratocaster and explains how he first came to incorporate the sound of feedback in his playing, dubbing the discovery as a very fortunate “accident”.

READ MORE: Bryan Adams Found Success By Writing Songs For Bands Like KISS Before Making It As An Artist: “[Record Labels]Didn’t Really Feel He Was A Long-Term Artist”

In a recent interview with the BBC Radio 2 show, Sounds Of The 70s With Johnnie Walker, the prodigal player opened up on the early days of his career, his time in The Yardbirds and why he has always loved the Fender Stratocaster.
Speaking with Johnnie Walker, Jeff Beck elaborates on the reason behind his decision to begin learning the guitar. Discussing the musicians that he idolised as a child, the guitarist confesses that he initially didn’t believe that the rock-style of guitar playing would become quite as monumental as it is today:
“It was Scotty Moore and Elvis’ band, obviously. Rock Around the Clock; there’s an amazing solo in there. Bill Haley and His Comets. Gene Vincent – you know, they were all amazingly individual, and they had their own sound and style… Buddy Holly” he recalls. “It just was rocket-propelled, from ’54 to today, really. I never thought that the guitar would be sustained for so long. And everybody knows what a Stratocaster is, which is quite amazing.”
Elaborating on his appreciation for the Fender design, the guitarist also states why he has always remained so devoted to the Stratocaster model of guitar, stating:
“It does what I want, you know. it’s infinitely variable in its tone and capabilities, with the spring-loaded bridge and all that. Amazing. It’s just – it was made for me. Thank you very much, Leo!”
Elsewhere in the interview, Beck discusses the use of feedback in his playing. Describing how he stumbled upon the technique by chance, the musician denies any claims that he founded the method – instead owing its discovery to The Who.
“That [technique] came as an accident! We played larger venues, around about ’64-’65, and the PA was inadequate. So we cranked up the level and then found out that feedback would happen. Pete Townshend discovered it, he has it on My Generation.”
He continues, “I started using it because it was controllable – you could play tunes with it. I did this once at Staines Town Hall with The Yardbirds and afterwards, this guy says, ‘You know that funny noise that wasn’t supposed to be there? I’d keep that in if I were you.’ [so] I said, ‘it was deliberate mate. Go away.’”
The full interview with Jeff Beck can be found on BBC Radio 2.
The post Jeff Beck is surprised at how far rock has come: “I never thought that the guitar would be sustained for so long” appeared first on Guitar.com | All Things Guitar.