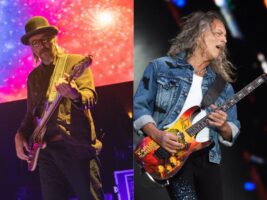 Primus bassist and vocalist Les Claypool has reminisced on what it was like going to high school with Metallica guitarist Kirk Hammett in recent interview. The bassist also discusses the time he auditioned to be in Metallica, claiming that although the role went to Jason Newsted, the event caused him to rethink his approach to his own band.

Speaking as part of an interview with Revolver last week, Les Claypool has described what it was like going to school with Metallica’s Kirk Hammett, claiming that it was due to this that the musician discovered some of his early musical influences.
Describing what the metal guitarist was like as a teenager, Claypool admited that Hammett for the most part was “a very unassuming person”, and while always being passionate about music, was never one to draw the limelight:
“Kirk was an interesting guy in high school. I think a lot of people didn’t even realise that they went to school with a guitar player from Metallica [because] he was a very unassuming person,” he states. “We bonded over was music, because I would always come in singing some Aerosmith song or something, whatever popular rock thing was going on at the time.”
“I didn’t play an instrument, and he always had all these guitar magazines, he’d be like, ‘Hey, Claypool, check it out, man.’ He had shown me a picture of the guitar he was gonna get, a picture of a blonde Strat. And sure enough, he got the blonde Strat!” Claypool continues, beginning to mimic the rock ’n’ roll attitude the guitarist had as an adolescent: “He’s like, ‘Man, I know the three key elements to success – sex, drugs and rock ’n’ roll.’ He was like Tommy Chong.”
Elsewhere in the interview, Claypool admits that Hammett, who was one year senior to him, was responsible for his discovery of artists including Jimi Hendrix; even encouraging him to sing for his high school band which would soon become Exodus.
“He’s the one that turned me on to Hendrix, he would give me cassettes. Kirk was a year older than me, too, and when you’re in high school- that’s a big deal,” he claims. “He wanted me to sing for his band, which became Exodus. He gave me Cream’s ‘Sunshine of Your Love’ to learn and I was just too embarrassed, I couldn’t do it. But in the process, he also gave me Hendrix’s ‘The Star-Spangled Banner,’ and it just blew my mind. We always just kind of bonded on that level.”
While Hammett joined the Metallica in 1983, Claypool describes how he also auditioned for the thrash band just three years later – following the death of the band’s bassist Cliff Burton.
Reflecting on how the audition changed his approach to writing music, Claypool states:
“The edgy stuff didn’t really come along until basically after I auditioned for Metallica […] When I auditioned for [them], I had to learn all these songs, and I was like, ‘Well, some of these songs, they’re very proggy – as far as lots of changes and whatnot.’” He claims. “So I kind of got me in that mindset, and I started adding that [metal aspect] to what we were doing. [Before, it was] this kind of – for lack of a better term – old Public Image, old Peter Gabriel type band.”
The post Les Claypool says Kirk Hammett was like “Tommy Chong” in high school: “He’s like, ‘Man, I know the three key elements to success: sex, drugs and rock ’n’ roll’” appeared first on Guitar.com | All Things Guitar.