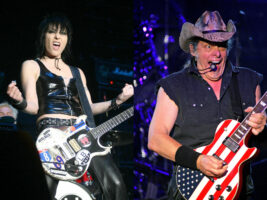 Joan Jett’s savage reply to Ted Nugent: “this is the guy who shit his pants so he didn’t have to go in the Army”

Joan Jett has hit back at Ted Nugent following the Cat Scratch Fever rocker’s less than friendly comments about Jett and her skills as a guitar player.

READ MORE: Joan Jett recalls being spat at while playing with The Runaways: “No one gave us any credit that we could play at all”

It all began last December, when Nugent raged on his YouTube livestream about Rolling Stone’s inclusion of Joan Jett on its — more than a decade old, mind you — list of 100 Greatest Guitarists, insisting that one has to have “shit for brains” to have put Jett on the list.
The 73-year-old musician was clearly fired up, saying: “How do you list the top 100 guitar players and not list Derek St. Holmes? How do you do that? You do that by lying. The same way you get Grandmaster Flash in the Rock and Roll Hall of Fame. You do that by lying. You have to be a liar.”
“You have to have shit for brains, and you have to be a soulless, soulless prick to put Joan Jett,” Nugent, who was not on the list, proclaimed.
And before anyone thinks less of his support for the LGBTQ community, the American rocker was quick to clarify that his stance has absolutely nothing to do with Jett’s sexuality, “[I] love Joan. Some of my greatest memories include lesbians. I love the lesbians; it’s a cocktail of wonderment.”
When asked to comment on Nugent’s claims of her not deserving to be on the list in a recent interview with NME, the rock legend had this to say: “Neither should he.”
“Is that his implication,” Jett asks, “that he should be on the list instead of me? Well, that’s just typical – it’s what I’ve dealt with my whole life, being written off. Ted Nugent has to live with being Ted Nugent. He has to be in that body, so that’s punishment enough.”
“He’s not a tough guy. He plays tough guy, but this is the guy who shit his pants – literally – so he didn’t have to go in the Army,” Jett added, alluding to a story about Nugent’s supposed efforts to evade the Vietnam War draft.
“So this, is the tough guy who’s running around America, stirring things up against each other,” she concluded.
The post Joan Jett’s savage reply to Ted Nugent: “this is the guy who shit his pants so he didn’t have to go in the Army” appeared first on Guitar.com | All Things Guitar.