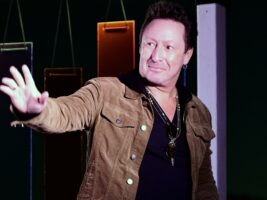 Julian Lennon has opened up about his feelings regarding Hey Jude, the song Paul McCartney wrote for him when his parents John and Cynthia Lennon split when he was five years old.

READ MORE: John Lennon’s killer said he did it for the fame: “This was evil in my heart”

In a new interview with iHeartRadio about his new album JUDE, Lennon shared that he had tried “offer up is a clearer understanding of [his] perspective” on the iconic track on his album, which pay homage to Hey Jude with its title.
“Obviously as a kid, [McCartney’s] lyrics and the song at the age of five didn’t really mean too much,” he continued, adding, “Of course it was only later in life that I realised what it was all about. And as much as I’m very thankful because of his support in having written that song a lot of people don’t realise it was also a dark reminder of what actually did happen.”
“Of dad walking out the door, leaving mum and I on our own to fend for ourselves. And that really, really, really was the case.”

He then discussed the perception that he and his mother were well off due to the money his father John had left in the bank, revealing, “People think it was a different situation that everything was hunky dory and there was lots of money in the bank. That was never ever the case. The thing that was most important to me was there was looking after mum.”
“She was the be all and end all of life for me, and it was about looking after her, still is about making her proud. Everything I do is to make her proud really, at the end of the day. Even though she’s not with us anymore. I know she guides me a little bit from time to time.”
Lennon released his seventh studio album JUDE earlier this year in September, 11 years after his previous LP Everything Changes was released in 2011. Alongside his music, Lennon has also produced and directed documentaries, and has appeared in several films including 1996’s Cannes Man and the 1995 drama Leaving Las Vegas.
He is also a noted photographer and author, and last year released the graphic novel The Morning Tribe.
The post Julian Lennon calls Hey Jude a “dark reminder” of parents splitting up appeared first on Guitar.com | All Things Guitar.