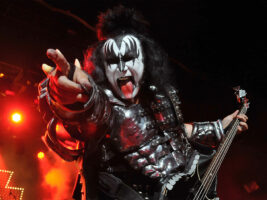 KISS have postponed four more shows on their End Of The Road world tour after bassist-singer Gene Simmons tested positive for COVID-19.
The group announced the postponement on Instagram earlier today (1 September), reporting that Simmons is “experiencing mild symptoms” and that the band and crew will be self-isolating for the next 10 days.
Stanley tweeted yesterday (31 August) to report that the worst of his symptoms had passed. “It’s over now,” he wrote.

My COVID symptoms were MILD compared to many others and let me tell you… It kicked my ass. It’s over now. pic.twitter.com/8HDMjKZT37
— Paul Stanley (@PaulStanleyLive) August 31, 2021

The postponed shows include the band’s appearance at Summerfest 2021 in Milwaukee, Wisconsin. See the affected dates below:

While new dates for the postponed shows have not yet been announced, KISS expect, based on indications from their doctors, that their tour “should be able to resume” on 9 September at the FivePoint Amphitheatre in Irvine, California.
Tickets for the postponed shows will be honoured at the new ones.
Last week, the band cancelled their concert in Burgettstown, Pennsylvania at the last minute after guitarist-singer Paul Stanley tested positive for COVID-19. It was reported at the time that the rest of the band and their crew were vaccinated and tested negative for coronavirus.
After news of Stanley’s test results broke, Simmons appeared on Los Angeles radio station 95.5 KLOS to disparage the US politicians whom he claims are spreading misinformation about the pandemic.
“Always listen to the CDC and the doctors – not stupid politicians,” Simmons said, per Billboard. “Not all politicians – evil, self-serving politicians of a certain party who are more interested in getting re-elected than actually saving lives. I can’t tell you how furious I am […] The politicians in Texas and Florida – evil, self-serving, just moronic. That includes the president of Brazil.”
The post KISS postpone next four shows after Gene Simmons tests positive for COVID-19 appeared first on Guitar.com | All Things Guitar.