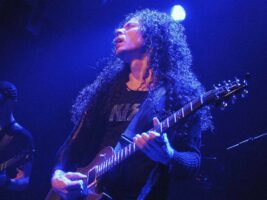 Former Megadeth guitarist Marty Friedman has put forward a theory on why data is suggesting Japanese listeners are beginning to skip guitar solos in songs.

Friedman wrote in a Facebook post, “So ‘GUITAR SOLO’ is trending in Japan right now. Why, you ask? Its because it has been reported (true or not, who knows) that in Japan it seems that data shows that on music subscription apps, many people are skipping to the next song when the guitar solo comes on,” adding that he wouldn’t be surprised if the statistic was true.
Explaining that he believed the statistic was mainly referring to mainstream hit music, Friedman detailed that a mainstream hit has many personnel attached even before it can become a hit, namely the artist, “songwriter(s), lyricist(s), producer, arranger, studio musicians for the demo, studio musicians for the master, label people, recording engineers and technicians, music video creators, directors and tech staff, and more”.
This leads to producers considering the guitar solo as the first thing they feel they can save time, energy, commitment and money on, because especially for mainstream music, a solo must have as “much care, magic, and reason for being there going for it as the vocal”.
Friedman added that Japan was more welcoming of guitar solos in mainstream music than the West, but the solo can sometimes become an obligatory part of a song to fill quotas, leading to uninspiring work that Friedman himself admits he sometimes skips.
“…Instead of having a guitar solo in the song just for the sake of familiarity, or because a guitar solo sounds cool (they usually do) it must be there for a deeper reason,” Friedman proclaimed, adding, “In the song creation stage, ideally the solo’s content, performance and even unique magic that fits that one particular song should be committed to and given a lot of thought.
As a fan I would wish that, and as a guitarist I always strive to do that.”

OK friends, strap yourselves in, this should be a good one.日本語は英文の下にあります。So “GUITAR SOLO” is trending in Japan right…
Posted by Marty Friedman on Friday, May 6, 2022

Last year, Friedman praised the new generation of internet-savvy guitarists, listing Mateus Asato and Ichika Nito as players that stand out to him.
“[Mateus is] from Brazil and he’s just a beautiful guitarist,” Friedman told Ultimate Guitar. “There’s another guy called Ichika from Japan and although his style is so completely different from mine – so much so, that I doubt I could even pick anything up from it, I just like the way he plays. I enjoy it.”
The post Marty Friedman theorises why there are less guitar solos in mainstream music – and why Japanese pop could follow suit appeared first on Guitar.com | All Things Guitar.