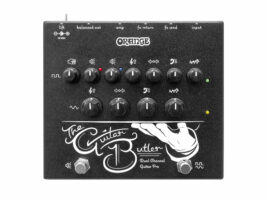 Orange Guitar Butler review: Could this two-channel preamp be the all-round tone-bringer you need?

Watching golden hour turn to dusk over the lawns of Guitar.com Towers, we’re struck by a niggling feeling that something is lacking in the versatility department with our pedalboard. Then the drawing room doors whisper open to reveal our telepathic manservant bearing the new Guitar Butler by Orange Amps.

Yes, Orange’s design mogul Ade Emsley has been at it again – with a preamp pedal that includes both a vintage-voiced clean channel, promising all the sparkle and sheen you need, and a JFET dirty channel for the classic amp-style distortion that Orange is so good at.
But that’s not all. It’s in sheer flexibility that this unit really stands out: quite aside from its 11 control knobs and two footswitches, there’s a balanced XLR DI out with cab simulation for recording and a dry output for running straight into your stage amp or power amp, plus an effects loop – letting you slip your time-based effects into the mix without them getting grubbied up by the preamp.
Like the Carl Martin Ampster we reviewed in April, this is a highly portable solution to the problem that sometimes a ‘real’ amp is just too big and heavy – especially if you insist on two channels. But does it have the tones to get the job done?

In use
Those unfamiliar with Orange Amps may find the hieroglyphic control labels daunting. But each symbol makes swift and abiding sense, and setting up the Guitar Butler is a simple operation.
In order to squeeze out maximum versatility, we plug into our MacBook’s audio interface via the balanced XLR and straight into an amplifier via the line out. We also mic up said amp with a Sennheiser E906 in the name of fun.
Orange may not be the first name that leaps to mind when it comes to chiming purity, yet the Guitar Butler’s clean channel serves up some eyebrow-raisingly silky sounds with both single-coils and humbuckers. When we dial in a little spring reverb from our DAW, things become very serious indeed.
Usefully, the dirty channel offers twin volume controls – so one of them can be set up to engage a boost with a tap of the left footswitch. And the sound you’re boosting is a good one.
This is not some effete transparent overdrive – what comes roaring out of both amp and headphones is a high-quality slab of rock’n’roll. This is not about hair metal posturing – it grunts, it screams, it djents, although the effect of scooping the mids is minimal at best.
Dialling the gain back a touch reveals a chewy rhythm sound that works as beautifully for powerchords as it does for adding a little grit to your arpeggios – slip some smeary tape delay into the effects loop and you have a good time on your hands here.
In short, the Guitar Butler is a well thought-out and rugged box of convincing rock and indie sounds that could slot into your rig in a number of applications, both on stage and in the studio.

DESCRIPTION Twin-channel preamp, made in UK

The post Orange Guitar Butler review: Could this two-channel preamp be the all-round tone-bringer you need? appeared first on Guitar.com | All Things Guitar.