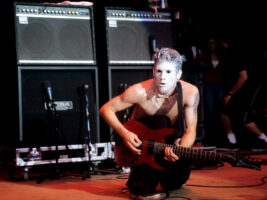 The weird gear of Wes Borland

Known as a master of disguise thanks to his outlandish on-stage outfits, Wes Borland’s gear is just as unorthodox – and misunderstood – as his wardrobe.

READ MORE: Who is The Rock And Roll Hall Of Fame actually for?

The Limp Bizkit guitarist has been supplying the band with crushing riffs since the mid-1990s. While frontman Fred Durst has long been a lightning rod for fan hate, there’s no denying the quality of the band’s guitar work.
Here, we speak to Borland’s longtime guitar tech Kadaver Dellamorte, as well as luthier George Gorodnitski, to better learn about the Bizkit player’s wonderfully weird gear.
Image: Brian Rasic / Getty Images
Sixes and sevens
Between 1997 and 1999, Borland used exclusively Ibanez guitars. On Limp Bizkit’s 1997 debut Three Dollar Bill, Y’all, Borland used a Universe, the first mass-produced seven-string in the world. But it wasn’t the only seven-string in Borland’s arsenal. He also had a rare Ibanez RG7 CST, of which only 18 were ever made and only two shipped to the US for sale.
While the use of seven-string guitars was typical for the era, with bands such as Korn doing much to popularise the approach, Borland used his a little differently. Rather than the usual BEADGBE tuning, Borland treated his sevens as six-strings with an additional high E.
Despite these early experimentations with Limp Bizkit, Borland eventually ditched all his seven-strings and no longer owns any.
All four one
Following his foray into the world of additional-string guitars, Borland decided that less really was more and dropped from seven strings to four (you read that right).
Borland began using an Ibanez Musician MC150PW modded to fit only four heavy strings. But the MC150PW had a scale length of 24.75 inches, far from the 27-inch scale you’d typically find on a baritone guitar.
After this, Ibanez made Borland a custom four-string. Later, he also played PRS guitars, one of which is also a custom four-string. Though he still owns that PRS, his four-strings eventually took a backseat to the custom semi-hollow four-strings built by Latvian luthier and friend of bandmate DJ Lethal’s father, George Gorodnitski.
Image: Andrew Benge / Redferns via Getty Images
“He wanted a very dark, heavy sound but transparent at the same time,” Gorodnitski tells us. ”It’s like playing bass with treble up. That’s why a longer scale was chosen. It added some brightness.”
Borland ordered two custom four-strings and a six-string version of Gorodnitski’s Cremona model.
The Cremona typically features a flame maple through-neck design, with Honduran mahogany wings, and a hand-carved top. The bridge and tailpiece are hand-carved from aluminium billet. The pickups are hand-wound humbuckers with alnico V magnets.
At 26.5 inches, Borland’s custom Cremonas have a scale about an inch longer than typical Stratocasters (25.5) and Les Pauls (24.75). Borland’s custom four-string also came with an unusual set of strings pulled from both guitar and bass: .030 E string, .042 B string, .052 F string, and a .080 F string an octave lower.

“Some people call this guitar a baritone,” Gorodnitski adds. “Nothing could be farther from the truth. It’s an absolutely unique instrument. Wes gave it to PRS once and they couldn’t reproduce this tone. So he took it back, and he uses these guitars up to today.”
Signature style
After a brief hiatus from the band in the early to mid-2000s, Borland returned to Limp Bizkit in 2004. The following year, he was approached by Yamaha about creating a new signature guitar. Borland embraced the idea and shouldered much of the design process. The resulting collaboration was a model unlike anything Yamaha had produced before: the CV820WB.
The Yamaha CV820WB features a semi-hollow body with split-field, high-output humbuckers made exclusively for Borland. It also boasts Yamaha’s FingerClamp locking tremolo system, which is unique in that you don’t have to cut the ends off your strings.
Borland loved the guitar. He used it for his Black Light Burns project and on the tours leading up to the recording of Limp Bizkit’s 2011 comeback album Gold Cobra. However, the guitar’s unusual design meant it wasn’t a bestseller. It was discontinued in 2011.

Fit for a King
At this point, Borland switched to Jackson guitars. Today, the guitarist typically plays Rhodes models on tour, and also uses King Vs and Warriors. Jackson has produced several custom models for Borland too. Perhaps unsurprisingly though, one of his favourite Jacksons happens to be somewhat unorthodox.
One of Borland’s most beloved Jacksons is a King V that was originally returned to the company due to a factory flaw. Initially left-handed, the guitar has since been modded by Borland, flipped to a right-handed setup and the original control knob holes and pickup selector rout filled with epoxy. Borland also removed the neck pickup and covered the rout with a plate.
The tremolo system had to be swapped out for a right-handed version too, which required some routing of the body. The single volume pot was relocated, and a new output jack was put into the upper horn (in its right-handed orientation). Additionally, fret markers had to be added to the top side of the neck, which Wes did with a soldering iron.

Borland takes pride in tackling such mods himself. As he once stated in response to YouTube comments saying that his guitars are “ugly” – yes, Borland does occasionally read the comments – “I don’t want Jackson to build anything I want. Part of the fun of what I do is getting to experiment. A lot of guitarists don’t understand me because I’m a visual artist first and I don’t approach the guitar in the same way that traditional players do.”
In interviews past, Borland has also stated that the more work he does on his own instruments, the more attached to them he becomes. This explains his connection to that heavily modded and factory-flawed King V, despite him having plenty of right-handed Jacksons and custom-built instruments at his disposal.
Image: Chiaki Nozu / WireImage
Bass drop
But it’s not just guitars that Borland is fit to tinker with. He also builds and mods basses. As the story goes, he recorded the 2010 Limp Bizkit track Walking Away using a 1960s Fender Bass I. But he didn’t want to take that instrument on the road. The solution? He’d build his own
Image: Stefan Hoederath / Redferns via Getty Images
Borland began with a Mustang bass before adding a custom nut and a Tele-style bridge. He routed out the pickup cavities to fit a guitar pickup, and added two additional machineheads to accompany the two high strings. You can see the custom bass’s headstock on his Instagram.

Getting Wes-proof
Borland is a busy musician, and often relies on his tech, Kadaver Dellamorte, to get new guitars ready for the beating they will ultimately receive from Borland on stage.
“There’s a few things we gotta do to ‘Wes-proof’ the guitars,” Kadaver tells us. “The first thing is to swap out the bridge pickup for a Seymour Duncan Invader. Then we remove any nonessential electronics. I’ll yank all the guts out and put it back so it’s just the pickup to a volume pot to the output. And I’ll move the volume knob (if it needs to be) to the lowest and furthest-back hole position. Very important – I have to swap out the tremolo arm coupler on the Floyd Rose bridge from the screw-on type to the push-in type.
Image: Didieer Messens / Referns
“I’ll also swap the string blocks and locking screws on the bridge for titanium parts. Then I’ll put on new strings and set up the guitar for his gauges. Typical setup, action, neck adjustment, intonation. All the Jacksons take Ernie Ball Slinky strings: .52, .42, .32, .22 wound, .14, .11 and tune to C♯ standard or drop-B. The four-strings are .80 bass string, .42, .32, .22 wound, and are tuned to F♯, F♯ an octave apart, B, and E. Lastly, we need to swap out the strap connectors with heavy duty eye bolts. All the straps have metal snap-hook latches on the ends that connect to the eye bolts on the guitars.”
Regardless of your feelings towards Limp Bizkit’s music, one cannot deny the lasting artistic influence that Wes Borland has had on the metal guitarists that have followed. Beneath the strange costumes and on-stage persona, Borland boasts a unique approach to artistry that is glaringly evident in his gear.
Limp Bizkit released the album Still Sucks in 2021. Wes Borland continues to release solo music and work on various side projects.
The post The weird gear of Wes Borland appeared first on Guitar.com | All Things Guitar.