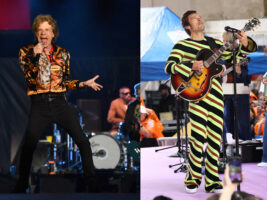 Mick Jagger calls Harry Styles comparisons “superficial”: “He doesn’t have a voice like mine or move on stage like me”

Mick Jagger has spoken out in an interview regarding the frequent comparisons often received between him and singer Harry Styles, calling the parallels “superficial”, noting that the pair’s similarities are really only surface level

In an interview in The Sunday Times, Jagger reflected on the notion that he inspired Styles, who often channels the early-Seventies Jagger look, and is regularly praised for the similarities in their performance styles.
The comparisons came flooding in after the release of Styles’ music video for his new single As It Was, where the singer can be seen wearing a spangly red jumpsuit, reminiscent of Jagger’s old stage outfits – Styles is also very vocal about his admiration for Jagger in general, and the influence of the Stones and their contemporaries can be heard all over his music, but especially in his debut solo record.
However, Jagger very much disputes claims that the singer is deliberately trying to ape his look or his performing style, stating that he “used to wear a lot more eye make-up than him Come on, I was much more androgynous. And he doesn’t have a voice like mine or move on stage like me; he just has a superficial resemblance to my younger self, which is fine — he can’t help that.”
This is not the first time in the past month that Jagger has made comments about fellow musicians. In an interview with Swedish radio station P4, he spoke out about the future of rock ‘n’ roll, stating that it is Yungblud and Machine Gun Kelly that give him hope that “there is still a bit of life in rock and roll”. “In rock music you need energy, and there have not been a lot of new rock singers around. Now there are a few,” he stated.
The post Mick Jagger calls Harry Styles comparisons “superficial”: “He doesn’t have a voice like mine or move on stage like me” appeared first on Guitar.com | All Things Guitar.